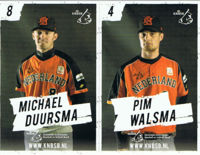 Walsma was added to the Dutch national team for the 2008 Haarlem Baseball Week. He allowed one run (and just one walk!) in 6 2/3 IP in the event and was kept on the roster for the 2008 Olympics. In Beijing, Pim allowed 8 hits and 6 runs in 4 innings; his 13.50 ERA was second-worst on the Netherlands staff. He threw three wild pitches in one inning against Team USA, allowing Terry Tiffee to advance from first to home. He won the 2008 Guus van der Heijden Memorial Trophy as the best Dutch international player aged 23 or under.

In the 2008 Hoofdklasse, Pim went 1-4 with a 3.58 ERA and went 10-for-10 in save opportunities, fanning 57 in 50 1/3 IP. He was third in the league in K/IP, tied Aristides Almenar for second in saves (one behind Michiel van Kampen) and ranked 8th in strikeouts. He got a win and a save in the playoffs. In the 2008 Holland Series, Walsma allowed one hit and no runs in 3 2/3 IP, fanning four and saving two games to help Amsterdam win its first title in 21 years.

Walsma pitched for the Dutch team in the 2009 World Baseball Classic, getting a start against the Puerto Rican national team. He walked five in two innings and allowed one run on walks to Jesus Feliciano and Ramon Vazquez, a wild pitch and a grounder by Carlos Beltrán. He took the loss in a 5-0 decision.

This biographical article is missing the person's: birth place
Retrieved from "https://www.baseball-reference.com/bpv/index.php?title=Pim_Walsma&oldid=563255"
Categories: