On April 28th, the 2015 Washington Nationals recorded the biggest comeback in team history when they beat the Atlanta Braves, 13-12. With rookie A.J. Cole rocked for 9 runs in two innings in an emergency start in place of an injured Max Scherzer, the Nats twice trailed by 8 runs, 9-1 and 10-2, before staging a comeback starting with a four-run 5th inning, highlighted by Jose Lobaton's three-run homer. They added a solo homer by Denard Span in the 6th, a three-run 7th that featured a two-run triple by former Brave Dan Uggla and an RBI pinch single by Reed Johnson. In the 9th, Uggla hit a three-run homer off closer Jason Grilli to give the Nats a 13-12 win, with Blake Treinen getting the win and Drew Storen the save. It was also the first time the Nationals had won a game in which they had allowed 11 or more runs. Before that game, the Nationals were in last place in the NL East, already 8 games behind the division leading New York Mets. However, they caught fire beginning with that game, going 15-4 over their next 19 games to approach within a half-game of the Mets on May 17th. They reached a tie for first-place with the Mets on May 19th, when a 10th-inning walk-off home run by Ryan Zimmerman off New York Yankees closer Andrew Miller gave them an 8-6 win. One of the big contributors to the Nationals' surge to first-place had been OF Bryce Harper, who hit his league-leading 15th homer in that game. 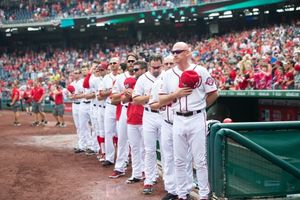 The Nationals face the San Francisco Giants on July 4, 2015

Just when it seemed nothing could stop the Nats, they ran into injury troubles in May. First, starter Doug Fister was placed on the disabled list with tightness in his forearm, soon followed by RF Jayson Werth who had two fractures in his wrist the result of a hit by pitch. On May 30th, it was Stephen Strasburg's turn to go on the DL after leaving a start the previous day after only 16 pitches, complaining of a stiff neck.

In June, the Nationals had a great string of performances from their starting pitchers. It began on June 19th when rookie Joe Ross pitched 7 1/3 innings, surrendering only a 2nd-inning run. That game started a string of 41 1/3 scoreless innings by the team's starters, a team record. Included in the streak was Max Scherzer's 6-0 no-hitter against the Pittsburgh Pirates on June 20th in which only a hit batsman with two outs in the 9th kept him form a perfect game, wins by Gio Gonzalez and Strasburg, healthy again, followed by 8 scoreless innings pitched by Jordan Zimmermann on June 24th in an extra-innings win over the Braves. On the 25th, Doug Fister, also back to health, continued the streak with 7 scoreless innings in a 7-0 win that completed a three-game sweep of the Braves. On June 26th, Scherzer led off his start against the Philadelphia Phillies with five perfect innings, then extended the scoreless streak to 48 1/3 when he kept the Phils off the scoreboard until an RBI double by Domonic Brown in the 7th. The Nats won that game as well, 5-2.

The Nats were in first place without interruption from June 20th until early August, after an earlier stretch leading the NL East in May. Most observers expected them to build a sizable lead once they had installed themselves in first, and they did in fact go up by 4 1/2 games on July 4th. However, they failed to build their lead beyond that, and their pursuers, most notably the New York Mets, were able to hang close. The Mets swept a three-game series from Washington on July 31-August 2nd, and when the Nationals lost their next game and the Mets won on August 3rd, they suddenly found themselves in second place, only 4 games above .500. Things kept getting worse after that, as six-game losing streak in mid-August put them under .500 at 58-59 on August 16th, 4 1/2 games behind the Mets, with catching up with the team from the Big Apple their only realistic option to make the postseason, as they were a huge 9 1/2 games back in the race for a wild card spot. Strangely enough, the Nationals tumble took place after three injured players returned to the team in late July, Jayson Werth, Anthony Rendon and Ryan Zimmerman, something which should normally have given them a lift. Another move that should have helped but turned out to be negative was the acquisition of closer Jonathan Papelbon at the trading deadline; he took over for Storen, who had been excellent until then, and Storen suddenly lost his mojo after being relegated to a set-up role, with a 10.38 ERA over his first 9 games in his new role and 8.49 in August. In fact, as the Nats' season went spinning out of control, observers pointed to the trade as the start of the center failing to hold. It helped that the day after the Nationals were mathematically eliminated, on September 27th, Papelbon got into a dugout scuffle with team MVP Harper that seemed to epitomize everything that had gone wrong since August 1st. Papelbon was then used in a 4-4 game against the Phillies and promptly gave up 5 runs in a disastrous 8-run 9th inning as the Phillies won, 12-5. He had been suspended for three games for throwing at the Baltimore Orioles' Manny Machado a few days earlier, and was awaiting the result of his appeal of a three-game suspension. The Nationals tacked on a four-game suspension for his clash with Harper, meaning that Papelbon's season - and likely his tenure in Washington - was over with a whimper.

There were more fireworks in the final days of the season. On October 3rd, Max Scherzer pitched his second no-hitter of the year defeating the Mets, 2-0. It was an overwhelming performance, as he struck 17 and walked none, earning a game score of 104, the highest recorded in the major leagues since Kerry Wood's 20-strikeout performance in April of 1998. The 17 strikeouts tied Nolan Ryan's mark for most in a no-hitter, and bettered by one Scherzer's existing team record, although still one shy of the franchise record held by Bill Gullickson back in 1980. He was the first pitcher since in Ryan in 1973 to throw two no-hitters in one season, and only the fifth in history (Roy Halladay had also done so, bit one of his no-hitters had come in the postseason). The season ended the next day with the Nationals finishing at 83-79, 7 games behind the Mets, and even further back in the wild card race. On October 5th, GM Mike Rizzo fired manager matt Williams and his entire coaching staff.