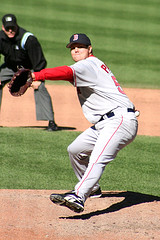 While with the Boston Red Sox, closer Jonathan Papelbon set a record for most successful save opportunities by a rookie to start a season in 2006, when he earned his 17th save.

Papelbon was originally drafted by the Red Sox in the 4th round of the 2003 amateur draft. He was signed by scout Joe Mason and made his pro debut that summer.

Papelbon became the quickest player in major league history to reach 200 saves when he recorded the milestone save in his 359th appearance, against the New York Yankees on June 7, 2011. Mariano Rivera has set the mark before him, needing 382 games to get to 200 saves. When he left the Red Sox after that season, he had 219 saves, a franchise record.

Papelbon recorded his 300th save on June 10, 2014, by which time he was pitching for the Philadelphia Phillies. Having needed 552 games, he was second-fastest to that level, after Trevor Hoffman and was the 26th to attain the figure. On September 1st, he completed a combined no-hitter over the Atlanta Braves by pitching a perfect 9th inning, after Cole Hamels, Jake Diekman and Ken Giles had kept the Braves from getting a hit through the first eight innings. While there was no save at stake with a 7-0 lead, the pressure was there given he did not wish to let his teammates down; he got Jose Constanza to fly out to left, and then forced Chris Johnson to ground out and Phil Gosselin to line out to 1B Darin Ruf to complete the rare feat. The usually calm Papelbon lost his cool on September 14th when he blew a 9th-inning 4-1 lead against the Miami Marlins; after the go-ahead run scored on a wild pitch, the crowd got on his back and he gestured to them in frustration, prompting umpire Joe West to eject him. While the Phillies were having a forgettable season, Papelbon was as good as ever, as he had racked up 37 saves with an ERA of 1.57 heading into the contest, so the meltdown was completely out of character. For his part Papelbon, said that whatever irked the officials had been inadvertent and was not intended as an inappropriate gesture. The Commissioner's office did not buy this explanation, however, and Papelbon was handed a fine and a seven-game suspension for his gesture, but Joe West was also handed a one-game suspension, for grabbing Papelbon's jersey and making the incident worse than it should have been. He finished the year at 2-3, 2.09, with 39 saves.

There was a lot of speculation that Papelbon would be traded after the 2014 season, given that having a top-notch and expensive closer should not have been a priority for a team not expected to be competitive for a couple of seasons at least, but he started the 2015 season still on the team's roster. He expressed his dissatisfaction with the situation by stating that he "didn't feel much like a Phillie", a statement that did not endear him to local fans. On May 8th, in picking up the save in a 3-1 win by Cole Hamels over the New York Mets, he tied Jose Mesa as the Phillies' all-time saves leader, with 112. Because he still held the Red Sox franchise record at the time, he became only the second player to lead two franchises in saves simultaneously, the other being Robb Nen, who holds the mark for both the San Francisco Giants and Miami Marlins (and their earlier incarnations). His next save, against the Pittsburgh Pirates on May 13th, made him the sole holder of the Phillies' team record. He was the Phillies' sole representative at the 2015 All-Star Game, then got his wish fulfilled as on July 28th, he was traded to the Washington Nationals in return for a pitching prospect, Nick Pivetta. He was 17 for 17 in save chances with a 1.49 ERA at the time of the trade. Nationals GM Mike Rizzo immediately announced that he would be the team's closer, displacing Drew Storen, even though Storen had been successful in 29 of 31 save chances. Papelbon's much longer track record of success was the difference. However, the move turned out to be disastrous; Papelbon pitched fine, but Storen seemingly lost all of his ability once moved from the closer's slot, leading to many fewer save opportunities as the Nationals tumbled out of contention. In late September, Papelbon was issued a three-game suspension for throwing at Baltimore's Manny Machado, and while he was awaiting a ruling on his appeal, got into a dugout fight with Bryce Harper on September 27th, before being sent into the game against his old team, the Phillies, and surrendering the first 5 runs of a nightmarish 8-run 9th inning as the Nationals lost, 12-5. Papelbon tried to minimize the scuffle after the game, comparing it to a fight between brothers, but after viewing footage of the incident, manager Matt Williams considered it much more serious, handing Papelbon a four-game suspension, effectively ending his season - and likely his tenure as a member of the Nats. After the season, he filed a grievance against the team, claiming the punishment was exaggerated given that he and Harper had cleared their differences and that he had apologized to his teammate for an incident that had come "in the heat of competition".

In a rather surprising move, the Nationals decided to bring back Papelbon in 2016 and tried to squash any potential controversy about his role by trading away Storen. His first order of business when he arrived in spring training on February 19th was to express remorse and apologize for the action that had marred the end of his previous season. At first, the Nats seemed to have made the right choice, as Papelbon pitched well in the first few months of the campaign, racking up 19 saves, while Storen struggled badly with his new team, the Toronto Blue Jays, who eventually traded him away for little return. But then, starting in July, Papelbon began to struggle as well, and with the Nats likely headed to the postseason, team management's confidence in heading into crucial games with him as the closer quickly eroded. At the trading deadline, the Nationals made a move, acquiring Mark Melancon from the Pittsburgh Pirates. It was clear that Papelbon's days with the team were numbered, and on August 13th, as he was released, after only pitching twice after Melancon's acquisition, both times in a mop-up role. He was 2-4, 4.37 in 37 games. He did not find another team to complete the season, nor one willing to give him a contract for 2017, making his retirement final even though there was no formal announcement. He finished his career with 368 saves, which was the 9th highest lifetime total at the time.

Papelbon's brothers, twins Jeremy and Josh, played baseball at the University of North Florida. Jeremy was selected by the Chicago Cubs in the 19th round of the 2006 amateur draft, while Josh was picked by the Boston Red Sox in the 48th round that year.

He was eligible for election to the Hall of Fame in 2022 but was dropped off the ballot after receiving just 1.3% of the vote.