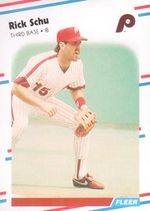 Rick Schu was signed as a free agent by the Philadelphia Phillies and scout Eddie Bockman on November 25, 1980.

Schu was a coach for the South Bend Silver Hawks in 1998, High Desert Mavericks in 1999-2000, Lancaster JetHawks in 2001, and Tucson Sidewinders in 2002. He was minor league hitting coordinator of the Arizona Diamondbacks in 2003 and 2005-2007, and was hitting coach of the MLB Diamondbacks in 2004. He was named hitting coach of the Diamondbacksin 2007 after the All-Star Game, replacing Kevin Seitzer. On May 8, 2009 Schu was fired by the Diamondbacks, along with manager Bob Melvin. In 2010, he became the minor league hitting coordinator for the Washington Nationals. On July 22, 2013, he was promoted to hitting coach of the Nationals, replacing the fired Rick Eckstein. On October 5, 2015, Schu was fired by the Nationals along with manager Matt Williams and the rest of the coaching staff, but on November 18th, he was brought back on board for 2016 by new manager Dusty Baker. He stayed on board until the end of the 2017 season, but was fired at the same time as Baker when the Nats were eliminated in the Division Series. He then moved to the San Francisco Giants, serving as a coach in 2018 and 2019.

Schu's father, Ken Schu, was a minor league pitcher in 1955.