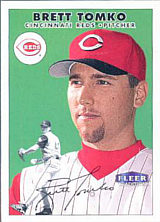 Brett Tomko was the winning pitcher in the first regular season game ever played between the Cleveland Indians and the Cincinnati Reds. He was a featured player in John Feinstein's 2014 book Where Nobody Knows Your Name: Life in the Minor Leagues of Baseball, chronicling the lives of several former big leaguers in Triple A in 2012.