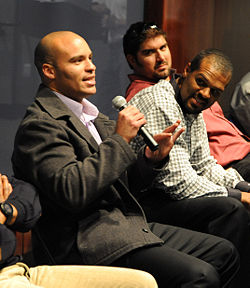 Scott Hairston played eleven seasons in the majors. He had moderate power, hitting the 20-homer mark in 2012.

Hairston was born in Fort Worth, TX in 1980, one of four major leaguers born there the same year - the others are Micah Hoffpauir, Kelly Shoppach and Ryan Roberts. Scott's father Jerry Hairston, although a long-time major leaguer, was playing in Mexico in 1980. Hairston attended high school in Arizona at Canyon del Oro High School, which also featured other future major leaguers, including Ian Kinsler, Chris Duncan, Shelley Duncan and Brian Anderson.

Scott played at Central Arizona College, along with Kinsler, and was drafted in the third round of the 2001 amateur draft.

Scott's first chance at the majors was in May 2004 with the Arizona Diamondbacks. He became the team's regular second baseman, posting a batting line of .248/.293/.442 and appearing in 101 games that season.

2005 and 2006 were largely spent back in the minors at Tucson, and he converted to being mostly an outfielder. 2007 found him playing in the majors again, this time as a left fielder, and he was traded in July by Arizona to the San Diego Padres where he blossomed, slugging .644 in 31 games. Between the two teams he had 294 plate appearances.

With the Padres in 2008 he was a frequently-used outfielder, appearing in 51 games in center field and 49 in left field, with a total of 362 plate appearances. He slugged .479, playing for a team whose ballpark strongly favored pitchers over hitters. In June that year, the Padres became the first major league team ever to win four consecutive games, all by the same score (it was 2-1). In the fourth game, it was Hairston who clinched the record, by hitting a 10th inning walk-off homer to beat the New York Mets. In 2009, Scott continued to hit quite well for the Padres, slugging .533 in 56 games through July 5th, when he was traded to the Oakland Athletics; he appeared in 60 games for the A's, but showed less power. Altogether, he had 464 at-bats, the most of his career, topped 100 hits for the only time, and also set a personal best with 64 RBI.

After the 2009 season the Padres traded to get him back, and although he started the 2010 season as a bench player, he became a regular fairly early in the season and appeared in 64 of the team's first 86 games. His brother Jerry was a teammate, and, like Scott, Jerry also started the season on the bench but soon became a regular. He hit .210 in 104 games that season.

On April 27, 2012, Hairston hit for the cycle for the New York Mets in a game against the Colorado Rockies at Coors Field. In spite of Scott's tremendous day, the Mets lost that game, 18-9. Unexpectedly, he was one of the Mets' better hitters that season, hitting .263 with 25 doubles and 20 homers in 377 at-bats while filling in at all three outfield positions. His 134 games were the most of his career, and he also set career highs for homers and runs scored (52). A free agent again after the season, he signed a two-year deal with the Chicago Cubs on January 23, 2013. He did provide some power from the right side of the plate, hitting 7 homers in 51 games, but he was hitting only .163 on July 7th when the Cubs shipped him to the Washington Nationals. In a statistical oddity, he had only 16 hits but 18 RBIs at that point of the season, the result of hitting in the middle of the line-up against lefthanders and having 9 of his 16 hits go for extra bases. His final season was in 2014, when he hit .208 in 61 games mainly as a pinch-hitter for the Nationals.

He is the son of Jerry Hairston Sr., brother of Jerry Hairston Jr., grandson of Sammy Hairston, nephew of Johnny Hairston and Sam Hairston Jr. and cousin of Jason Hairston and John Hairston Jr.. Hairston played for the Mexican national team in the 2009 World Baseball Classic, alongside his brother. He hit .278/.500/.444 with 8 walks, 5 runs and 4 RBI in 6 games, leading the team's starters in OBP. He hit one home run, off Paul Mildren. He rotated between left field and center field. The brothers qualified for the team because their mother is from Mexico; she met their father while he was playing in the Mexican League.