Note: This page is for Bradley Michael Snyder, major league outfielder in the 2010s. For the author of the same name, click here. 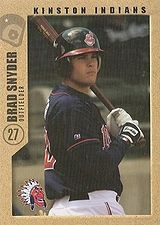 Outfielder Brad Snyder attended Ball State University, where he hit .405 with 14 home runs and 61 RBI in 2003, as he was named the Mid-American Conference Player of the Year. He was selected by the Cleveland Indians in the first round of the 2003 amateur draft and signed by scouts Bob Mayer and Chuck Ricci. He made his pro debut that summer with the Mahoning Valley Scrappers, with whom he hit .284 with a team-best 14 steals and 52 runs scored. After missing the first month of the 2004 campaign with an eye infection, he began the year with the Lake County Captains, where he hit .280 with 10 home runs in 79 games before being promoted to the Kinston Indians. With Kinston, he hit .355 with 6 home runs in 29 games.

Snyder began 2005 back with Kinston and hit .278 with 6 homers in 58 games before earning a promotion to the AA Akron Aeros. He hit .280 with 16 home runs in 75 games with the club, as the Aeros captured the Eastern League championship. He returned to Akron the next season and batted .270 with 18 homers and led the EL with 86 runs scored.

On September 21, 2006, he got the call to the Big Leagues. He spent the rest of the season on the Indians' active roster but failed to appear in a game.He would have to wait until 2010 to actually get into a game, by which time he was with the Chicago Cubs.

His younger brother, Ben Snyder, was a professional baseball player as well.