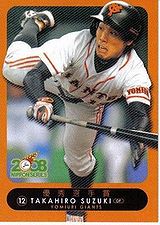 Takahiro Suzuki is an outfielder who has been primarily a defensive substitute or pinch-runner in his first six seasons. He has stolen 115 bases through 2008.

In 2006, the switch-hitter batted .241/.276/.286 in 89 games and stole 25 bases in 29 tries. Yoshinobu Takahashi had begun the season as Yomiuri's main center fielder but moved more to right and left later in the year so Suzuki could man the middle. He was 4th in the Central League in steals, trailing Norichika Aoki, Norihiro Akahoshi and Masahiro Araki.