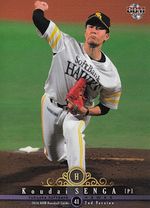 Kodai Senga has pitched in Nippon Pro Baseball and for the Japanese national team.

Senga battled shoulder problems that limited him to 19 games in 2014 (1-1, 1.99). He pitched four games, three starts, late in 2015 and was excellent at 2-1, 0.40. He got into two games in the 2015 Japan Series. In Game 3, he relieved Kenichi Nakata with a 4-3 lead in the 5th, one out and Tetsuto Yamada at the plate; Yamada had already homered off Nakata twice. He greeted Senga with another long ball, becoming the first player with three homers in a Japan Series game. Senga did not allow another hit in 2 1/3 innings that Series and Softbank took the title. [2]

By 2016, he had his first at-bat (the PL uses a DH, but he got to bat an interleague game) and also got his first hit, off Randy Messenger. As a member of Softbank's rotation for the full season for the first time, he was 12-3 with a 2.61 ERA and 181 whiffs in 169 innings. He finished third in the PL in ERA (behind Ayumu Ishikawa and Yusei Kikuchi [3]), tied Kikuchi for fourth in wins and was second to Takahiro Norimoto in both strikeouts and strikeouts per 9 innings. Had Shohei Otani qualified (he just missed), he would have been ahead of Senga in both ERA and K/9. He got one third-place vote for the 2016 Pacific League Most Valuable Player Award. [4]

Senga debuted for Samurai Japan with a relief win in the 2017 World Baseball Classic. He took over for Toshiya Okada in the 6th against Australia with a 1-1 tie and tossed two shutout innings, allowing only one hit (to Tim Kennelly) and fanning four before Naoki Miyanishi took over. When Sho Nakata hit a home run in the 7th, that put Senga in position to get the decision in what would be a 4-1 victory. [5] He got his only start of the Classic against Israel and allowed only one hit (to Sam Fuld) and one walk in five shutout innings but was matched zero-for-zero by Josh Zeid; Japan rallied to win after Zeid and Senga had left. In the semifinals against eventual champion Team USA, he entered in the 7th, relieving Tomoyuki Sugano with a 1-1 tie. He struck out Eric Hosmer, Andrew McCutchen and [{Buster Posey]] in order in the 7th. In the 8th, he allowed his only run of the Classic, giving up a one-out single to Brandon Crawford, a double to Ian Kinsler and a run-scoring grounder to Adam Jones before whiffing Christian Yelich. It was enough to make him the losing hurler in a tough 2-1 defeat. For the Classic, he was 1-1 with a 0.82 ERA, one walk and 16 K in 11 IP. He tied Sugano for the WBC lead in strikeouts and joined Zeid and Marcus Stroman as the All-Star pitchers, the lone Japanese player picked for the 2017 All-Tournament team. [6] He was the fourth Japanese hurler to make a World Baseball Classic All-Tournament team, following Daisuke Matsuzaka (2006, 2009), Hisashi Iwakuma (2009) and Kenta Maeda (2013). South Korea was the only other country that had produced more than one All-Tournament pitcher, with two.

Following the 2022 season, he indicated his interest in playing in Major League Baseball. Having just turned 30, he could do so as an international free agent and not via the posting system, which made him interesting to a number of teams looking for pitching.