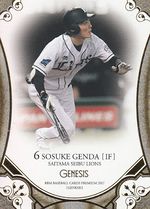 Genda was a third-round pick of the Seibu Lions in the 2016 NPB draft after hitting .285 in his collegiate career. His first NPB hit came off Keisuke Tanimoto and his first homer against Yuki Egarashi. He was a late addition to the Pacific League team for the 2017 NPB All-Star Games. In Game 1, he replaced Kenta Imamiya at short and went 0 for 3, grounding out against Akitake Okada and flying out against Katsuki Matayoshi and Yasuaki Yamasaki. In game 2, he started and hit 9th, being retired by Takumi Akiyama and Shoichi Ino before Nobuhiro Matsuda pinch-hit for him. Genda hit .270/.317/.351 and fielded .971 at short as a rookie in 2017 but these numbers belie some of his other accomplishments. He set Seibu franchise records for hits by a rookie (155, 28 more than Hiromichi Ishige's mark, set 36 years prior), triples by a rookie (10) and steals by a rookie (37 in 47 tries, 12 more than Ishige and Yasumitsu Toyoda. His 155 hits were the second-most by a rookie since the two-league era began in 1950; only Shinya Sasaki had more. He was the first PL rookie with double-digit triples since Kingo Motoyashiki 59 years earlier. He became the first NPB rookie to appear in every inning of every game since 1961 and was the 4th ever to do so; Shigeo Nagashima, Sasaki and Sadayuki Tokutake had preceded him. He led PL shortstops with 228 putouts and 481 assists, led the league in triples (10, 3 ahead of Shunta Goto and Imamiya), was third in runs (85, behind Shogo Akiyama and Yuki Yanagita), was second in steals (2 behind Haruki Nishikawa) and was 4th with 26 sacrifice hits. He was the runaway winner of the 2017 Pacific League Rookie of the Year Award with 252 of 258 votes and had a shot at the Best Nine at short, getting 81 votes to Imamiya's 90 and Eigoro Mogi's 87.

He made the PL team for the 2018 NPB All-Star Game as well. In Game 1, he replaced Ryoichi Adachi at short late in a 7-6 win. He drew a walk from Katsuki Azuma in his lone plate appearance. In Game 2, he started at short in a 5-1 win, hitting 8th. He grounded out against Daichi Osera in the 2nd. In the 5th, he doubled off Yuta Iwasada to score Nobuhiro Matsuda with the game's first run; he then scored on a single by Takuya Kai. He flew out against Koji Uehara in the 6th then Adachi replaced him. He won Game MVP honors.