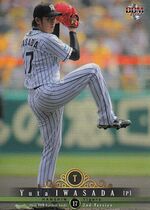 He blossomed in 2016, going 10-9 with a 2.90 ERA. He finished 5th in the CL in ERA (between Kazuto Taguchi and Randy Messenger), tied Hiroki Kuroda and Taguchi for 5th in wins, tied Kris Johnson and Tomoyuki Sugano for 2nd with two shutouts (one behind Shun Yamaguchi) and was 4th with 156 strikeouts (between Shintaro Fujinami and Johnson). [4] He made the CL All-Star team. In 2016 NPB All-Star Game 2, he relieved Kenta Ishida in the 3rd with a 2-0 lead. Daichi Suzuki singled, Tatsuhiro Tamura flew out and Takero Okajima grounded into a double play. After the CL scored in the 3rd, the 4th went similarly. Takumi Kuriyama singled, Yoshio Itoi struck out and Ernesto Mejia grounded into a twin killing. [5]

The Kumamoto native was on the Japanese national team's designated pitcher pool for the 2017 World Baseball Classic but was not activated. He fell to 5-10, 4.96 in 2017, tying Shoichi Ino for 4th in the CL in losses. He was back to All-Star form the next year. In 2018 NPB All-Star Game 2, he relieved Osera in the 4th inning of a scoreless game. He got Alfredo Despaigne on a fly, allowed singles to Hotaka Yamakawa and Shogo Nakamura then again ended an All-Star inning with a double-play grounder, this time from Akira Nakamura. In the 5th, he ran into trouble as Nobuhiro Matsuda and Sosuke Genda doubled and Takuya Kai singled to make it 2-0. He then got Yuki Yanagita, Shuta Tonosaki and Masataka Yoshida to end the inning. Koji Uehara then relieved; Iwasada took the loss in a 5-1 decision. [6]