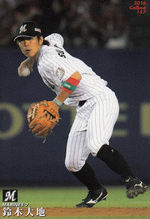 Suzuki was named after 1988 Gold Medal swimmer Daichi Suzuki. The Shizuoka native was on the Japanese squad that won Bronze at the 2010 World University Championship. The Chiba Lotte Marines took him in the third round of the 2011 draft. He started the year in the minors but was up by June. He pinch-ran for Saburo Omura in his NPB debut, faced Itsuki Shoda in his first at-bat and doubled off Kentaro Nishimura June 11 for his first hit. He hit .274/.340/.326 in 62 games for the 2012 season. He was the main backup to Toshiaki Imae at 3B and Shunichi Nemoto at SS and also subbed for Tadahito Iguchi at 2B.

Suzuki became Chiba Lotte's starting shortstop in 2013. He hit his first NPB homer April 25 against Atsushi Okamoto. Earlier in April, he became the 6th PL player to hit a triple in three straight games, following 1950s players Kazuo Kageyama, Hisayuki Miyake and Kingo Motoyashiki as well as Chihiro Hamana and Daisuke Hayakawa. He made the Pacific League All-Star team. For the season, he hit .264/.330/.383 and fielded .993. He led the PL with 11 triples, four ahead of runner-up Shogo Akiyama. Despite that type of speed, he only had two steals in six tries. He won the Best Nine nod as the PL's top shortstop in a close race, getting 96 votes to 87 for former major leaguer Kazuo Matsui (Kenta Imamiya also had 33).