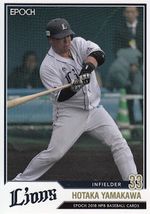 Hotaka Yamakawa has been a MVP in Japan.

Yamakawa played for the Japanese national team in the 2012 Asian Championship, the only collegiate position player on the squad; Japan won the Gold Medal, with a grand slam off Young-pyo Ko in the 6-2 Gold Medal Game win. [1] He also helped Japan win the 2013 East Asian Games. [2] He hit .304 for his collegiate career. [3] He was picked by the Seibu Lions in the second round of the 2013 NPB draft, one round after Tomoya Mori in what would be a good draft for Seibu. [4] Due to his hefty size and power, he was nicknamed Okawari-II after another beefy Lions slugger, Takeya Nakamura. [5]

Yamakawa became Seibu's starting first baseman for 2018, Mejia moving to DH. He made his first All-Star team. In 2018 NPB All-Star Game 1, he took over for Sho Nakata at 1B early in a 7-6 win over the Central League. He flew out against Randy Messenger in the 3rd, grounded out versus Onelki Garcia in the 5th, singled off Garcia in the 6th to plate Shuta Tonosaki and struck out against Katsuki Azuma in the 8th. [12] The next day, he started at first and hit cleanup in a 5-1 win. He drew a first-inning walk from Tomoyuki Sugano, singled in the 4th off Yuta Iwasada and grounded out in the 6th against Koji Uehara before being replaced by Toshiaki Imae. [13] After the season, he was on the Samurai Japan team that beat the MLB All-Stars. [14] For the year, he hit .281/.396/.590 in the regular season with 115 runs, 47 homers, 88 walks and 124 RBI. He led the PL in runs (8 ahead of Shogo Akiyama) and home runs (11 more than #2 Yanagita), was 2nd in RBI (3 behind Hideto Asamura), 2nd in walks (8 behind Haruki Nishikawa), 5th in OBP (between Masataka Yoshida and Nishikawa), 2nd in slugging (.071 behind Yanagita), 2nd in OPS (107 behind Yanagita) and 2nd in total bases (319, 3 behind Akiyama). He was picked to the Best Nine at first base and won the 2018 PL MVP, 991 vote points to 750 by infield mate Asamura; he had 148 first-place votes to Asamura's 81. [15] He was the first Seibu player to win since fellow first baseman Alex Cabrera 16 years prior.