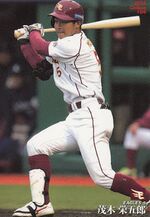 He started on Opening Day, a first for a Rakuten rookie shortstop. [5] He tripled off Rick van den Hurk for his first NPB hit and got his first NPB homer off Isamu Sato. [6] He became the first NPB player since Masahiro Kawai in 1992 to hit two inside-the-park homers in a season. [7] He finished the season at .278/.330/.408 with 7 triples. He tied Masahiro Nishino for the Pacific League lead in three-baggers, was 8th with 21 sacrifice hits and led shortstops with 19 errors (fielding .964 there). He came close in voting for the 2016 Pacific League Rookie of the Year Award, losing to Hirotoshi Takanashi 131 votes to 116. [8]

Mogi made the PL team for the 2017 NPB All-Star Game but had to withdraw due to injury and was replaced by Sosuke Genda. [9] He finished the 2017 season at .296/.370/.497 with 17 dingers. He finished third in average (between Shogo Akiyama and Yuki Yanagita), 6th in OBP (between Takahiro Okada and Ginji Akaminai) and 4th in slugging (between Alfredo Despaigne and Zelous Wheeler), impressive numbers for a shortstop. [10] He did not make the Best Nine as Kenta Imamiya was voted the PL's top shortstop, 90 votes to Mogi's 87 while Genda was also close at 81. [11] The Tokyo native led off a playoff game against the Seibu Lions with a first-pitch homer on October 15, joining Takumi Kuriyama and Ikuhiro Kiyota as the only players to do so. Three days later, he hit his second lead-off homer of the Series; Kiyota was the only other player with two lead-off homers in the same playoff series. [12]