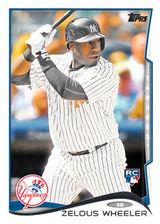 Zelous Wheeler made his major league debut in 2014.

Wheeler played on the Wallace State team that made the Junior College World Series in 2006. The Milwaukee Brewers took him in the 19th round of the 2007 amateur draft, one round before Evan Chambers; the signing scout was Joe Mason. Wheeler hit .300/.398/.411 in his pro debut for the Helena Brewers and fielded .932 at third base. He was 7th in the Pioneer League in OBP and first in fielding percentage at 3B. In 2008, he batted .258/.346/.406 with 31 doubles, 80 runs, 87 RBI and 61 walks for the West Virginia Power. He tied Everth Cabrera for 9th in the South Atlantic League in runs, tied Brandon Laird for 9th in doubles and tied Jesus Montero and Greg Sexton for 6th in RBI. In the Brewers chain, he tied Michael Brantley for 5th in runs, tied Adam Heether and Lorenzo Cain for 5th in doubles and was third in RBI behind Steffan Wilson and Mat Gamel.

The Alabama native fielded .931 at 3B for the 2009 Brevard County Manatees while he batted .268/.370/.390 with 60 walks. His power numbers were down a bit (23 2B, 7 HR). He tied Kevin Melillo and Heether for 5th in the Brewers chain in walks and led in sacrifice flies (10). In the Florida State League, he was 4th in walks (5 shy of co-leaders Damon Sublett and Chris Parmelee) and tied for second in sacrifice flies. His 74 putouts and 29 double plays both led the league's third baseman. He tied for 9th in minor league baseball in sac flies. Wheeler moved to shortstop primarily with the 2010 Huntsville Stars, Taylor Green taking third base. Wheeler made 32 errors at SS (5 shy of leader Dee Gordon) and 5 more at other spots. He produced at a .275/.382/.396 clip with 76 runs and 70 walks. He was 5th in the Southern League in walks (between Christian Marrero and Blake Lalli) and third in times plunked (15, behind Brandon Tripp and Kristopher Negron). In the Brewers chain, he was second in walks (7 behind Khris Davis) and tied Brendan Katin and Davis for 4th in times hit by pitch. Baseball America rated him as having the best infield arm in Milwaukee's farm system.

He remained a steady but not stellar hitter in 2013, spent with Bowie (.299/.402/.391 in 24 G) and Norfolk (.268/.340/.421 in 89 G). With Norfolk, be split third base with Danny Valencia and backed up Schoop at second base. In the winter, he again went to Mexico, this time with the Naranjeros de Hermosillo; his batting line was .268/.363/.431 and he had 37 runs, 35 walks, 41 RBI and 11 home runs in 67 contests. He was tied for third in runs (with Jerry Owens), was third in RBI (behind Jake Fox and Brian Burgamy), tied Ben Guez for third in walks, was 10th in OPS, ranked 9th in slugging (between Jose Aguilar and Mark Hamilton) and tied for second in homers (even with Canizares, Fox, Russell Branyan and Roberson, trailing only Burgamy). The New York Yankees liked what they saw enough to offer him a minor-league deal. He then came up big in the postseason, with a three-run shot off Hugo Gutierrez to help Hermosillo rally to win game 7 of the LMP finals and go to the 2014 Caribbean Series.

He started the 2014 season with the Scranton/Wilkes-Barre RailRiders, where he hit .299 with 20 doubles and 7 homers in 66 games before being called up to the Big Apple on July 3rd. He replaced 3B Yangervis Solarte on the roster and the starting line-up, after Solarte had fallen into a deep slump following a hot start. In his debut, Zelous went 2 for 4 including a solo homer off Philip Hughes in a 7-4 win over the Minnesota Twins.