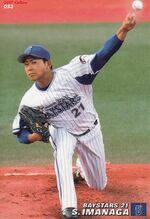 Shota Imanaga has pitched in Nippon Pro Baseball and for the Japanese national team.

In 2017, he was 11-7 with a 2.98 ERA. He made the CL leaders for ERA (5th, between Yusuke Nomura and Takumi Akiyama), wins (tied Messenger for 7th), Ks (4th, between Messenger and Haruhiro Hamaguchi) and shutouts (2, tied Kazuto Taguchi and Kazuki Yabuta for 2nd, one behind Tomoyuki Sugano). [3] In the 2017 Japan Series, he set a season high with 10 K in six innings in Game 2 against the Softbank Hawks, Tomoya Mikami relieving him with a lead that did not hold. He was only the second southpaw to whiff ten in his first Japan Series game; Hisanori Takahashi had done it 17 years prior. [4] He then got the nod in Game 6, with the BayStars down 3 games to 2. He struck out 11 and allowed a Nobuhiro Matsuda dinger but no other runs in seven; Shoichi Ino took over with a 3-1 lead but again Softbank rallied. He joined Yu Darvish as the only hurlers to fan 10+ in back-to-back starts in a Japan Series. [5] He easily led the Series in K, ten ahead of Nao Higashihama. [6]

Imanaga then made the Japanese squad for the 2019 Premier 12. Against Taiwan, he went three shutout frames (4 H, 4 K, 0 BB) before Yudai Ono relieved; Ono got the credit for the win. He then dominated against Bronze Medal winner Mexico, allowing only one hit (a Jon Jones homer) in six innings, fanning eight, to beat Horacio Ramirez. He was 4th in the event in whiffs (behind Hyeon-jong Yang, Arturo Reyes and Shao-Ching Chiang), leading the champion Japanese team. [10]