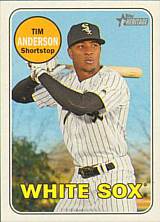 Shortstop Tim Anderson was the 17th overall pick by the Chicago White Sox and scout Warren Hughes in the 2013 amateur draft.

Anderson was called up to Chicago to make his major league debut in June 2016. He hit his first major league homer June 21st, leading off a game at Fenway Park by going deep against Clay Buchholz and sending the White Sox on their way to a 3-1 win. He was quickly installed as the starting shortstop, with the team releasing veteran Jimmy Rollins shortly after his arrival. In 99 games, he hit .283 with 9 homers and 30 RBI while scoring 57 runs. One area of concern was that he walked only 13 times, while striking out 117, an imbalance that could eventually turn problematic. Still, the White Sox were pleased by what they had seen, and heading into 2017 they signed him to a six-year contract worth $25 million, buying out his arbitration years and setting up potential options for two more seasons at a significantly higher rate of pay. It was the most lucrative deal ever offered to a player with less than a full year of major league experience, topping the $17.5 million given to Evan Longoria by the Tampa Bay Rays shortly after his big league debut. That year, he hit .257 in 143 games, with 17 homers and 56 RBI, but his OBP was just .276, and he only drew 13 walks while striking out 162 times. He improved that awful ratio only slightly in 2018, to 30/149, but also hit just .240. When he did make contact though, it was solid, as he hit 28 doubles and 20 homers.

He took a big step forward at the start of the 2019 season, as he had a great first month. He hit .381 with 6 homers and 17 RBI in 22 games to be named the American League Player of the Month. While his walk percentage (2.9%) remained problematic, he won the American League batting crown, batting .335/.357/.508 over 123 games. He had another good season in 2020 as the White Sox returned to the postseason in a season shortened to 60 games by the Coronavirus pandemic. He played in 49 games and led the AL with 45 runs scored as teammate Jose Abreu was the league's best run producer. He batted .322/.357/.529, won a Silver Slugger Award for the first time and finished 7th in the voting for the 2020 American League Most Valuable Player Award (Abreu was the winner). In his first taste of the postseason, he went a scorching 9-for-14 in the White Sox's loss to the Oakland Athletics in the Wild Card Series.

In 2021, he was named an All-Star for the first time as the White Sox ran away from all their opponents in the AL Central in spite of playing without OFs Eloy Jimenez and Luis Robert for most of the first half; Anderson and Abreu carried the team in their absence. He was the hero of the "Field of Dreams Game" played in a temporary ballpark erected in a cornfield in Dyersville, IA on August 12th to commemorate the 1989 movie Field of Dreams: with the White Sox trailing 8-7 in the bottom of the 9th after coughing up a three-run lead, he hit a two-run walk-off homer off Zack Britton into the cornrows to end the thrilling game and give his team a 9-8 win over the New York Yankees. As the season was winding down in late September, he was given a three-game suspension for making contact with umpire Tim Timmons on September 27th. The incident occurred in the 9th inning after benches had cleared in the game with the Detroit Tigers, the result of an altercation being Jose Abreu and Niko Goodrum. Anderson appealed the suspension, likely pushing it back into the following season. He later recognized that he did push Timmons in the heat of the scuffle because he was right on him, but that he did it without realizing it was the umpire. He finished the season at .309 in 123 games with 17 homers, 94 runs and 61 RBIs for an OPS+ of 118. The White Sox won a division title and in the Division Series against the Houston Astros, he went 7 for 19 with 4 runs scores, but the Sox lost in four games; it was his second straight year of putting up superlative postseason numbers as his team went down to defeat.

He started 2022 as one of the few players in the line-up to be hitting well on a Chicago team that was in a collective hitting slump. After 35 games, he was at .359 with 5 homers and 18 RBIs. That is when he was at the center of a controversy blown up by the fact it took place at New Yankee Stadium. in a game against the Yankees on May 21st, 3B Josh Donaldson taunted him as he slid into the bag with the name "Jackie", apparently based on the fact that an article in Sports Illustrated in 2019 had compared Anderson to the great Jackie Robinson. Anderson found the action to be disrespectful and tainted with racism and objected strongly, which led to benches clearing (but no punches being exchanged) and a media tempest. The Commissioner's office said it would investigate the incident, and later issued a one-game suspension and a fine of an undisclosed amount to Donaldson. He was named to the All-Star team for the second time that season. On July 30th, he was isued a three-game suspension for coming into contact with umpire Nick Mahrley the day before, after Mahrley had ejected him for arguing a strike three call. Manager Tony LaRussa was also ejected as a result of the dispute. The suspension was reduced to two games on appeal and he began serving it on August 7th.