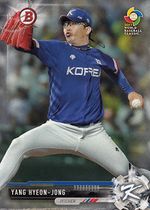 Hyeon-jong Yang emerged as one of Korea's top pitchers in 2009, and over a decade later, made his major league debut at age 33 in 2021.

Yang was a high school star. He pitched for South Korea in the 2006 World Junior Championship, helping them win Gold. In the semifinals, he outdueled Canada's Philippe Aumont, a first-round pick in MLB's draft. Yang went in the first round of the KBO draft that year to the KIA Tigers.

The Gwangju native was 16-8 with a 4.25 ERA in the 2014 KBO, striking out 165 and walking 77 in 171 1/3 innings. He was second in wins (four behind Andy Van Hekken), third in strikeouts (behind Rick van den Hurk and Van Hekken) and second in walks (four behind Kim). He starred in the 2014 Asian Games, striking out seven in four shutout innings (allowing four hits), starting against Taiwan in the round-robin and relieving against them in the Gold Medal game, again won by South Korea. He was one K behind team leader Kim. Yang was posted by the KIA Tigers, at his request, on November 17, 2014, although he failed to attract a bid from a major league team that was considered sufficient by KIA and returned to his original team as a result.

In the 2017 World Baseball Classic, he got the nod against Taiwan and did not impress with 3 runs on five hits in three innings, though he did whiff six. He left with a solid 8-3 lead, though, when Chang-min Shim took over. Unfortunately for the hosts, the bullpen tanked and South Korea needed extra innings to win. He tied Si-hwan Jang and Chang-yong Lim for the highest ERA on the staff but also tied Seung-hwan Oh for the team lead in strikeouts. He was 20-6 with a 3.44 ERA in the 2017 KBO and showed improved control (158 K to 45 BB in 193 1/3 IP). He was 5th in ERA (between Woo-chan Cha and Noesi), tied Noesi for the win lead, was second in IP (8 1/3 behind Noesi), ranked third in whiffs (behind Kelly and Dustin Nippert) and did not make the top ten in walks. He kept rolling in the postseason as KIA won the 2017 Korean Series. He struck out 11 in a four-hitter against the Doosan Bears in game 2, the 10th complete game shutout in Series annals. Then, in game 5, with a 3 games to 1 lead and a 7-6 edge in the contest, he was summoned to close it out. He walked Jae-hwan Kim and a one-out two-base error by Joo-hyung Kim put the potential winning run on second. After an intentional walk to Kyoung-min Hur, he retired Sei-hyok Park and Jae-ho Kim to save it. He was named Korean Series MVP, the first hurler picked since Oh won in 2011. He also won KBO MVP, the first player to be named Series MVP and regular-season MVP in the same year. He got 656 voting points to Jeong Choi's 362 and Noesi's 208.

Yang was 13-11 with a 4.15 ERA in the 2018 KBO, tying Keyvius Sampson and Won-tae Choi for 5th in wins but also tying for 5th in losses. He fanned 152, 8th in the league, between Lindblom and Lisalverto Bonilla; he was the only Korean native in the top ten. He took a loss in the 2018 Asian Games when he gave up a two-run homer to Taiwan's Chia-Yu Lin, losing to Sheng-Feng Wu. He still got the nod in the Gold Medal Game and was much sharper, allowing only one hit (to Shoji Kitamura) and one walk (to Kohei Sasagawa) in six innings for the win; Pil-joon Jang took over. It was his third Gold Medal in the Asian Games.

He rebounded in the 2019 KBO: 16-8, 2.29. He was 5th in wins, led in ERA (.21 ahead of MVP Lindblom) and 3rd with 163 K (behind Lindblom and Kwang-hyun Kim). He was absolutely dominant in the 2019 Premier 12 opener, fanning ten and allowing one hit (to Robbie Glendinning) in six shutout innings to beat Australia and Tim Atherton. He allowed ten hits in 5 2/3 IP against Team USA but still got the win, as their only run was a Brent Rooker homer; Cody Ponce took the loss. In the finale, he allowed four hits, three walks and four runs in three (a three-run shot by Tetsuto Yamada was the big hit) in a loss to Japan and Rei Takahashi. He tied Takahashi, Yi Chang, Hiroshi Kaino and Yudai Ono for the event lead in wins, tied for first in starts (with Atherton, Ponce, Arturo Reyes and Shun Yamaguchi), led in IP (14 2/3, one ahead of Chang) and led with 21 whiffs (8 ahead of Reyes and Shao-Ching Chiang).

In 2020, he fell to 11-10, 4.70, his worst ERA in eight years. He tied for 10th in the KBO in wins and was 5th with 149 K (between Odrisamer Despaigne and Drew Gagnon). Hoping that 2020 had been a fluke, the Texas Rangers signed him for 2021. He was called up in late April and debuted against the Los Angeles Angels on April 26th, relieving Jordan Lyles with a 7-4 deficit in the 3rd, two out and two on. He ended that rally by retiring Anthony Rendon. He was then untouchable in the 4th and 5th, getting Jared Walsh, Justin Upton, Albert Pujols, José Iglesias, Kurt Suzuki and David Fletcher in order. He finally faded in the 6th, allowing hits to Shohei Ohtani and Mike Trout. After Rendon flew out, Jared Walsh doubled in a run. He recovered for his first MLB K, against Upton. Overall, he worked 4 1/3 innings with 5 hits, no walks and 2 runs, fanning one. Josh Sborz relieved for him.