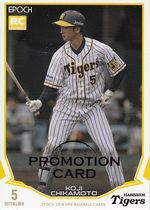 Koji Chikamoto has played in Nippon Pro Baseball and for the Japanese national team.

Chikamoto played for Osaka Gas in the industrial leagues after college. Picked for Japan's squad in the 2018 Asian Games, he hit .250/.333/.313 as their primary center fielder with four runs in five games. He did most of his damage (3 of his 4 hits, both his RBI, two of his four runs, his only double) in a win over China. In the Gold Medal Game, he was 0 for 3 as Japan was stymied by South Korea. [1] He was picked to the Best Nine in the industrial leagues that year. [2] The Hanshin Tigers took him in the 1st round of the 2018 NPB draft. [3]

He came up big on Opening Day, starting in center and hitting 2nd. He tripled off Yasuhiro Ogawa to score Seiya Kinami with Hanshin's first run of the year to tie the game at 1 in the 6th; Hanshin went on to win 2-1 in extra innings. [4] His first NPB homer came off Yuki Kuniyoshi April 11. [5] After 25 games, he was batting .312/.347/.527 with 4 homers, 15 runs and 14 RBI for a superb start in NPB. [6] He made the Central League team for the 2019 NPB All-Star Games though his numbers were down from that brilliant start. He was 0 for 1 in a Game 1 loss after replacing Yoshihiro Maru in CF. In game 2, though, he started and dazzled. He homered off Taisuke Yamaoka to become the first rookie to hit a leadoff homer in a NPB All-Star Game. He added a single, two doubles and a triple to go 5-for-5 and take home the MVP. It ended a five-game losing streak for the CL. He was only the second player to hit for the cycle in an All-Star Game, following Hall-of-Famer Atsuya Furuta by 27 years. He was the second player with a five-hit All-Star Game, following Roberto Petagine's feat in 2001. [7]