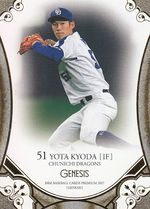 Kyoda played for the Japanese collegiate All-Star team in their 2016 match with the US collegiate team. He was a second round pick of the Chunichi Dragons in the 2016 NPB draft, following Yuya Yanagi. He started from Opening Day 2017, getting a hit of Miles Mikolas that day. His first homer came May 3 off Yuta Nakamura. He was the first NPB rookie in the draft era (1966- ) to have six multi-hit games in a row, breaking the mark shared by Nobuhiro Takashiro, Hiromichi Ishige, Yoshinori Ogata and Hisayoshi Chono. He was the first Dragons rookie to 100 hits since Kosuke Fukudome in 1999 and was the second rookie in the draft era to have a five-hit game (Tsuyoshi Oshita had done it 50 years earlier). He broke Shinichi Etoh's record for hits by a Chunichi rookie (139) and finished with the second-most hits ever by a Central League rookie (149, behind Shigeo Nagashima's 153). Oddly, he did not have the most hits by a NPB rookie that year as Sosuke Genda had even more in the Pacific League. Kyoda finished the season with a batting line of .264/.297/.355 while fielding .980 at short. He scored 67 runs and legged out 8 triples. He stole 23 bases but was caught 13 times and had a poor walk rate (18 BB, 105 K in 602 plate appearances). He finished first in the CL in triples (3 ahead of the runners-up), tied Yohei Oshima for second in swipes (behind Kosuke Tanaka), tied Tanaka for the most times caught stealing and was 5th with 9 times plunked (between Yuhei Nakamura and Brad Eldred). He won the 2017 Central League Rookie of the Year Award, getting 208 of 286 votes, while Yusuke Oyama was second with 49. He was similar to PL winner Genda in setting hit records and leading his league in triples while playing regularly at short.