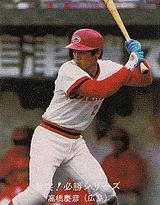 Yoshihiko Takahashi was a star infielder for the Hiroshima Carp from 1976-1989, making five Best Nine teams and setting the all-time Nippon Pro Baseball record for the longest hitting streak.

Takahashi served as the sparkplug for Hiroshima as they won the CL pennant in 1979. He hit .304/.360/.408 and finished 9th in the league in average. His steal rate improved significantly as he pilfered 55 while only being nabbed 16 times. He had 7 triples (leading the CL) and scored 86 times. He led the league in steals and times caught stealing, made his first All-Star team and his second Best Nine. In the 1979 Japan Series, he batted .444/.464/.667 and won the MVP award as the Carp claimed the title. From June 6 until July 31, he hit in 38 straight games, setting the NPB record for the longest hitting streak ever. As of July 31, 2007, it remains unmatched.

By 1983, he was again an All-Star with a .305/.378/.523 batting line in a comeback campaign. He hit 24 home runs, more than 3 times his total from any prior year, scored 91 and stole 70 bases in 98 attempts (the 28 times caught stealing was a CL record). On April 26, he became the sixth player in NPB history to homer from both sides of the plate. He tied Ryuzo Yamazaki and Keiji Nagasaki for 8th in the league in average. He made his fourth Best Nine team. He failed to lead the CL in stolen bases as Tadashi Matsumoto pilfered 76.

Takahashi was suspended by the Carp for two weeks in early 1987 when he failed to show up for a team event. He finished the year with a .281/.336/.407 batting line and 28 steals in 36 tries. The power faded away as he only hit 11 home runs and would never top 12 again after that nice four-year run of 20+ he had just completed.

Through 2006, Takahashi is tied with Arihito Muramatsu for 22nd all-time in NPB in triples (57) and was 5th in steals (behind only Yutaka Fukumoto, Yoshinori Hirose, Isao Shibata and Chusuke Kizuka.

After retiring as a player, Takahashi has worked as an announcer and has coached for the Daiei Hawks (1995) and Chiba Lotte Marines. While coaching for the Marines in 2007, Takahashi was part of a brawl that led to the 5th time in NPB history that three or more people were ejected. Yoshihiko was tossed along with Tuffy Rhodes and coach Jon Debus of the Orix Buffaloes. He was fined $50,000 for the incident.