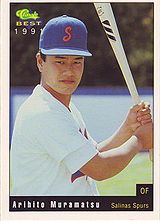 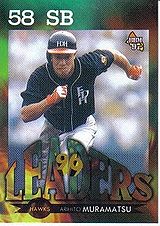 Outfielder Arihito Muramatsu has won two Gold Gloves in NPB and once been named to the Best Nine. He has stolen over 250 bases and has played in the Olympics.

Muramatsu was a high school teammate of Hideki Matsui, batting behind Matsui in the order. He was drafted in the 6th round in 1990 by the Daiei Hawks. He played for the Salinas Spurs in 1991 before returning to Japan. Muramatsu made his NPB debut in 1992, hitting .188/.253/.246 in 39 games. He only appeared in 25 contests for Daiei the next two years.

In 1995, Muramatsu hit .308/.366/.360 in regular action and stole 32 bases in 49 tries. He was second in the Pacific League in steals, trailing Ichiro Suzuki, and led in times caught stealing. Had he qualified, he would have ranked third in the PL in average after Ichiro and Koichi Hori and just ahead of Julio Franco.

The outfielder became a full-time player in 1996, batting .293/.370/.372. He was 8th in the PL in average and led in steals (58, 8 more than Kazuo Matsui), triples (9) and times caught stealing (26). He joined Ichiro Suzuki and So Taguchi in the PL Best Nine outfield; among those he beat out was Tuffy Rhodes, who had been second in the league in both runs and RBI. He was on the PL All-Star team that year as well.

Muramatsu hit only .241/.327/.289 in 1997 and his steal rate remained poor (42 SB, 23 CS). He was third in the Pacific League in swipes behind Kazuo Matsui and Makoto Kosaka while being thrown out the most in the league.

Muramatsu bounced back impressively in 2003 and produced at a .324/.372/.482 rate, the best of his career. On July 1, he hit for the cycle. He set career highs in runs (85), doubles (29), triples (13), home runs (6) and RBI (57) and stole 32 bases while only being caught 10 times. He made his second PL All-Star team, led the league in triples and was second to Iguchi in steals. He was 8th in average and served as a key sparkplug for a Daiei team that had the first quartet of 100-RBI men in NPB history with Iguchi, Johjima, Pedro Valdes and Nobuhiko Matsunaka. Muramatsu won his first Gold Glove. Amazingly, he accomplished all of this despite missing all of September; he broke his shoulder while making a diving catch in August and was out of action until the Japan Series. In the 2003 Japan Series, he hit .273/.333/.273 as Daiei claimed its second title.

Muramatsu moved to the Orix BlueWave as a free agent in 2004 and batted .320/.371/.427 though his steal total fell to 11. He won his second Gold Glove and made his third All-Star team. He was 5th in the PL in average; three of the players ahead of him were former teammates (Matsunaka, Johjima and Iguchi) He also played in the 2004 Olympics, backing up Yoshinobu Takahashi in center field for Japan and was used as a pinch-runner. He went 1 for 1 with a triple, sacrifice hit and two runs in the event. He played the final two innings in center field as a defensive sub in the Bronze Medal Game, which Japan won.

Following the 2008 season, Arihito was traded to the Softbank Hawks for Naoyuki Omura.