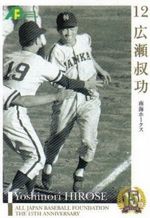 The former career Nippon Pro Baseball record-holder for stolen bases, Yoshinori Hirose is still second all-time through 2006. A nine-time All-Star, Hirose was not a one-dimensional player, showing good power and contact and playing many positions. He is a member of the Japanese Baseball Hall of Fame and the Meikyukai. He played all twenty-two of his seasons for the Nankai Hawks and later managed them for three years.

Hirose was signed initially as a pitcher in a tryout prior to the 1955 season but hurt his arm and only pitched two innings in his career, walking three and allowing two hits but no runs in 1956. Moving to shortstop, Yoshinori hit .400/.423/.520 in 26 plate appearances over 19 games. He also stole his first two bases.

In 1957, the youngster became a starter, hitting .284/.316/.382 but being thrown out 14 times in 39 attempts to steal. Despite routinely topping 40 steals in the future, he would never be caught that many times in a year again.

In the 1962 season, Yoshinori batted .280/.343/.414 and stole 50 bases while only being caught nine times. He drew a career-high 50 walks and scored 99 times. He led the league in steals for the second time and runs for the third time. He made his fifth All-Star team.

Glenn Mickens, who competed against Hirose from 1959-1963, reports that he was the one player in Japan "who could fly! They called him Choro, choro, choro - something about the wiggling of a mouse. Boy, he could run." Mickens commented that this was unusual at the time as most Japanese players were not known for their speed.

Hirose had a career year in 1964, producing at a .366/.414/.548 clip and stealing 72 bases while only being caught nine times. He scored 110 runs and led the PL with 35 doubles. It was the second-highest average ever by a right-handed hitter. Amazingly, he missed the All-Star team though he did make the Best Nine. From March 28 till May 30, he stole 31 bases in a row without being caught. He had a 27-game hitting streak from May 14 to June 13. He led the league in runs for the fourth and final time and won his only batting title, 38 points ahead of runner-up Isao Harimoto. He also led the league in a fourth category, this one no surprise - stolen bases. He helped the club to their second and last title by batting .345/.367/.621 in the 1964 Japan Series. He had 4 doubles and two triples in the Series, though he was just 1 for 3 in steal attempts.

An All-Star once more in 1965, Yoshinori hit .298/.331/.498 with 35 steals in 47 tries. He tied his career high with 10 triples and had his best home run season with 15. He made his third straight and final Best Nine selection. He was fifth in the PL in average, led in steals for the fifth and final time and also led in doubles (33) and triples. He and Daryl Spencer (walks) were the only players other than Hirose's star teammate Katsuya Nomura to lead the league in an offensive statistic. It would be Hirose's last top-notch season as he declined from that point.

During the 1968 season, Yoshinori hit .294/.336/.425 in a fine comeback. He stole 44 bases while being caught only twice but was 10 steals behind PL leader Tomonori Yasui. Still, he set the all-time NPB record for base-stealing percentage. He had 7 triples to tie Don Blasingame for the league lead, his last time leading the league in anything. He was 5th in the PL in average.

Yoshinori's batting line read .241/.307/.289 in 1972. On July 1, he became the 6th player in NPB history to get 2,000 hits when he connected off of Osamu Higashio. In his last fine year on the bases, he stole 42 while being caught just 7 times. The league had a new base-stealing legend, though, one who would break his records - Yutaka Fukumoto. Hirose won a Diamond Glove Award that year, the first year they were distributed; one presumes he would have won another seasons if they had been given out in his prime.