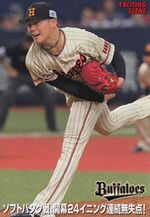 Yoshinobu Yamamoto has won a Sawamura Award and won an Olympic Gold Medal with the Japanese national team.

He moved to the bullpen in 2018 and was impressive enough to make the Pacific League team for the 2018 NPB All-Star Games. In Game 1, he relieved Yusei Kikuchi in the 3rd with a 5-3 lead. Tetsuto Yamada greeted him with a single; after he retired Norichika Aoki and Hayato Sakamoto, Yoshitomo Tsutsugo took him deep to tie it. Seiya Suzuki singled but he escaped further harm by retiring Wladimir Balentien. Mike Bolsinger took over in the 4th. [3] He became the first 20-year-old Buffalo hurler to pitch 50 games since Masafumi Hirai in 1995 and was the youngest player to register 30 holds in NPB history (he finished with 32). [4] For the season, he was 4-2 with a save and a 2.89 ERA. He got 70 votes for the 2018 Pacific League Rookie of the Year Award to finish 2nd, 42 points behind outfielder Kazuki Tanaka. [5]

Yamamoto pitched for Japan in their friendly exhibition against the Mexican national team in early 2019. [6] He returned to the rotation in 2019 after Chihiro Kaneko and Yuki Nishi left Orix and he was dominant at 8-6, 1.95 with a .96 WHIP. He had a three-inning save in 2019 NPB All-Star Game 1, the first time someone had done that since Hiroshi Takamura in 1996, relieving Yuki Matsui with a 4-1 lead and allowing two runs in three (on a Fumihito Haraguchi two-run shot in the 9th after the lead was 6-1). [7] He won the PL ERA title, .51 ahead of runner-up Kohei Arihara. [8] He was tied for 8th in wins and 5th in strikeouts (127, between Atsuki Taneichi and Kota Futaki). He was 11th in voting for the 2019 Pacific League Most Valuable Player Award. [9] He did not get the Best Nine nod in the PL, which went to Kodai Senga.

The right-hander then made Japan's squad for the 2019 Premier 12. Now hitting 98 on the radar gun at his peak, he wound up back in the bullpen for Japan. His first outing came against Puerto Rico, relieving Kan Otake in the 8th with a 4-0 lead. He gave up a single to Edwin Gómez but Jack López hit into a double play and Yamamoto got Jay Gonzalez swinging. Yasuaki Yamasaki relieved in the 9th. He pitched five games in the tournament, posting a 1.80 ERA, tying Yamasaki for the team lead in games pitched. He also tied for the tournament lead in pitching appearances. He made his last appearance in the Gold Medal Game, replacing Hiroshi Kaino in the 8th with a 5-3 lead. He fanned Jung-hoo Lee, got Ha-seong Kim on a fly then whiffed Jae-hwan Kim before Yamasaki closed it out. [10]

Yamamoto was back with Japan for the Tokyo Olympics. He started against Bronze Medal winner the Dominican Republic (a team with numerous past major leaguers as well as some prospects) and pitched six shutout innings (2 H, 1 BB, 9 K) but was matched zero for zero by C.C. Mercedes. Koyo Aoyagi took over in the 7th. Facing South Korea with a spot in the Gold Medal Game for the winner, he threw five shutout innings and carried a 2-0 lead into the 6th but allowed three hits while retiring one as they closed it to 2-1. Suguru Iwazaki relieved and let an inherited runner score to tie it, but Japan prevailed and would go on to win Gold. He was second in the Olympics in IP (2 2/3 behind Mercedes), tied Eui-lee Lee for the most strikeouts (18) and had the second-best ERA among pitchers with 6+ IP (Sang-woo Cho was at 1.13; Nick Martinez was close behind at 1.64 to his 1.59). [14]

He was lights-out for 2021 at 18-5, 1.39 with 206 K in 193 2/3 IP, posting a .85 WHIP. He won a pitching Triple Crown, beating teammate Hiroya Miyagi for the ERA title by a whopping 1.12. He led in wins by 5 ahead of Miyagi and in strikeouts by 54 ahead of Takahiro Norimoto. His six complete games were double runners-up Imai and Kazuya Ojima. His four shutouts were double runner-up Ojima. [15] In Game 1 of the 2021 Japan Series, he got the nod against the Yakult Swallows. He pitched six fine innings (5 H, 2 BB, 9 K, 1 R) but was outdueled by Yasunobu Okugawa and Ryo Yoshida relieved him with a 1-0 deficit. Orix would rally to win the game. [16] While the Series was going on, he won the Sawamura Award as Japan's dominant pitcher. The last Orix winner had been Kaneko, seven years prior. It had been eight years since a Sawamura Award winner had such a low ERA (Masahiro Tanaka in that case) and ten years since one had struck out more (again Tanaka). He also was the first pitcher to win four Pitcher of the Month Awards since Tanaka and set a franchise record with 15 straight wins. [17] He was back on the hill for Game 6 of the 2021 Japan Series, down 3 games to 2. He struck out 11 and allowed one run in nine but was matched by three Yakult hurlers and gave way to Yoshihisa Hirano in the 10th; Yakult would win in 12. He won the Fighting Spirit Award as the MVP of the losing Japan Series entry and a Gold Glove [18] He was also the runaway winner of the 2021 PL MVP, with 283 of 286 first-place votes; teammate Yutaro Sugimoto had two and Miyagi one. [19]

On June 18, 2022, Yamamoto threw a no-hitter against the Seibu Lions. It made history by being the 4th no-hitter in NPB that year, the first time that had happened in a season; he was preceded by Roki Sasaki, Nao Higashihama and Shota Imanaga. [20] In 2022 NPB All-Star Game 2, he relieved Keisuke Honda in the third with a 1-1 game. Adam Walker hit into an error, then Yamada flew out and Munetaka Murakami singled. He struck out Teruaki Sato and retired Yusuke Ohyama to end the inning. Higashihama succeeded him. [21] His numbers for 2022 were very similar to '21: 15-5, 1.68, .92 WHIP, 205 K in 193 IP. He was among the PL leaders in wins (1st, 3 more than runner-up Kona Takahashi), ERA (1st, .26 ahead of Senga), complete games (4, 1st, one ahead of Takayuki Katoh and Naoyuki Uwasawa), shutouts (2, tied for 1st), innings (1st, 17 1/3 ahead of Takahashi) and strikeouts (1st, 32 ahead of Sasaki). [22] He was the first NPB pitcher to win consecutive pitching Triple Crowns. While he again carried Orix into the Japan Series, he was rocked in the 2022 Japan Series opener. He gave up a two-run double to Yakult's José Osuna in the first, and homers to Yasutaka Shiomi and Osuna, for four runs in four innings before leaving in the 5th with injury. He lost to Yasuhiro Ogawa. Orix would win the Series, though, with their ace sidelined. [23] He also was the runaway winner of the 2022 Pacific League MVP, with 255 of 267 first-place votes and 1,299 vote points; teammate Masataka Yoshida was next with 605 vote points. He and Murakami were the first pair of CL/PL MVPs to repeat since Sadaharu Oh and Hisashi Yamada in 1976-1977. [24] He also won a Gold Glove and a Best Nine again. [25]