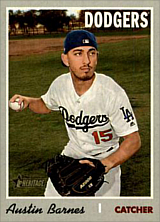 Austin Barnes plays a rare combination of positions, with his time as a professional split between catcher and second base. Just as unusual: Barnes stole home on July 17, 2019, a rare feat for anyone in baseball in the 21st century, let alone a catcher.

He was drafted by the Florida Marlins in the 9th round of the 2011 amateur draft out of Arizona State University and made his professional debut that season with the Jamestown Jammers of the New York-Penn League. There, he hit .288/.369/.361 in 57 games with a homer and 19 RBI splitting time between catcher and second base. In 2012, he was with the Greensboro Grasshoppers of the South Atlantic League and had an excellent season, hitting .318/.401/.481 in 123 games with 12 homers and 65 RBI. He played mostly second base that year, but moved back behind the plate almost full-time in 2013, a season he split between the Jupiter Hammerheads of the Florida State League and the Jacksonville Suns of the Southern League. He hit .260 with 4 homers and 38 RBI in 98 games in the FSL and .339 in 19 games in his first taste of Double A ball for a combined line of .272/.379/.364. He played for the same two teams in 2014, starting at Jupiter where he hit .317 in 44 games, and then getting a promotion to Jacksonville where, in 78 games, he batted .296 with 12 homers and 43 RBI. He was back splitting time between the infield and the backstop, getting to play third base in addition to second.

On December 10, 2014, Austin was included in a major trade that saw him head to the Los Angeles Dodgers, alongside Andrew Heaney, Chris Hatcher and Enrique Hernandez, in return for Dee Gordon, Dan Haren and Miguel Rojas. He began 2015 with the Triple A Oklahoma City Dodgers. In 29 games, he hit .290 with 3 homers and 13 RBI, playing exclusively at catcher, before getting the call to The Show in late May. He made his major league debut on May 24th, when he started a game at catcher against the San Diego Padres, going 1 for 3 in an 11-3 loss. He played 20 games that season with the big club, while making the midseason and postseason All-Star team at catcher in the Pacific Coast League with a .315/.389/.479 line in 81 games. Austin scuffled in limited action with the 2016 Dodgers, batting .156/.270/.188 in 21 games while receiving his first postseason action (pinch hitting and pinch running) in the NLDS. He made his first Opening Day roster in 2017 as the backup to Yasmani Grandal, gradually seeing more and more regular work as the season progressed. In 102 games, he put up a solid .289/.408/.486 with 8 home runs and 38 RBI. On June 30, 2017, he slugged two home runs (a grand slam and a three-run shot) in a big day against the San Diego Padres. He handled much of the starting catching duties that fall, batting .500 (4-for-8) in the NLDS against division rival Arizona before mustering a combined 6-for-38 in the NLCS and World Series.

Barnes' batting line took a dramatic step backward in 2018. He batted just .205/.329/.290 in 100 games with only 4 home runs and 14 RBI. Despite his less than robust offensive output, defensive struggles by Grandal in the postseason led to Barnes receiving an uptick in playing time. In the LCS and World Series, he batted a combined 2-for-29. With Grandal's departure in free agency, the door was open for Barnes as he was the Opening Day receiver. Another poor offensive season allowed catching prospect Will Smith to seize control of the job and the acquisition of former Dodger receiver Russell Martin eventually pushed Austin to the minors. He finished the year .203/.293/.340 in 76 big league games.

Austin is the nephew of Mike Gallego. His brother, Griffin Barnes, signed with the Los Angeles Angels in 2019.