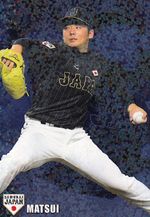 Pitcher Yuki Matsui has pitched in Nippon Pro Baseball and for the Japanese national team.

Matsui set a National Summer High School Championship record with 22 strikeouts in a game in 2012, breaking Yoshinori Toda's 49-year-old record by one. [1] In the 2013 World Junior Championship, he struck out 12 in a 3-hitter over Taiwan, beat South Korea and got the nod against the USA in the Gold Medal game. He dueled Brady Aiken through four but allowed three runs in the next two innings and took the loss. [2] He tied Tomohiro Anraku for the tournament lead with 27 strikeouts and tied for second in wins (one behind Se-woong Park). He did not make the All-Star team as teammate Anraku was picked as the top starter. It was still one of Japan's top efforts, their third Silver Medal in event history. He was the most popular player in the 2013 NPB draft as five of the twelve teams picked him first overall; the lottery assigned his rights to the Tohoku Rakuten Golden Eagles. [3]

He made an immediate impact, making the rotation as a rookie and striking out 126 batters in 116 innings his first season; his first NPB whiff was Yoshio Itoi. [4] He was 4-8 with a 3.80 ERA. He tied Takayuki Kishi for 5th in the Pacific League in strikeouts though his 67 walks were also second to Kikuchi. He got two votes for the 2014 Pacific League Rookie of the Year Award, though his ERA was not that much higher (.32) than winner Ayumu Ishikawa. [5]

He moved to the bullpen and posted a 0.87 ERA with 33 saves and 103 strikeouts in 72 1/3 innings in 2015. He allowed only 37 hits and was 3-2. He was 4th in the PL in saves, between Yuji Nishino and Tomomi Takahashi, 5th with 63 games pitched and led all full-time relievers in whiffs, one ahead of Dennis Sarfate. He made the PL team for the 2015 NPB All-Star Games; relieving Naoki Miyanishi with two outs, a runner on second and a 7-4 deficit in game 1, he allowed a triple to Kosuke Tanaka and struck out Hector Luna. [6] He was Japan's youngest player in the 2015 Premier 12; Shohei Otani was born over a year prior. He struggled in the first Premier 12 game, relieving Takahiro Norimoto in the 9th with a 5-0 lead over South Korea and allowed hits to Dae-ho Lee, Byung-ho Park and Ah-seop Son but struck out Jae-kyun Hwang and retired Eui-ji Yang and Sang-soo Kim to keep the shutout. He saved Yasuhiro Ogawa's 4-2 win over the Dominican national team. Against Venezuela, he tried to save a game, replacing Kazuhisa Makita with a 4-3 lead but allowed singles to Juan Apodaca and Francisco Caraballo, walked Renny Osuna and allowed a two-run double to José Yépez. He got the win when Japan rallied for two in the bottom of the 9th. He had a 6.00 ERA and a .467 opponent average when he got one more call in a key situation. In the finale, he relieved Norimoto with the bases loaded, no out and a 3-1 lead, but walked Hyun-soo Kim to force in a run. Hirotoshi Masui relieved and threw more gas on the fire as South Korea concluded their comeback to stun Japan. [7]

His ERA rose to 3.32 in 2016, but he still struck out 75 batters in 62 1/3 innings. He was 1-4 with 30 saves but walked 40 and allowed more hits (47). He finished third in saves behind Sarfate and Yoshihisa Hirano and he tied for 5th with 58 games pitched. He was much better in his second international tournament, 2017 World Baseball Classic, throwing 2 2/3 shutout innings with no hits and striking out five. He walked only one (Jurickson Profar). [8] He was again Japan's youngest player, over a year younger than Seiya Suzuki. Early in 2017, he made more history by becoming the 17th NPB hurler to strike out the side on nine pitches and the first Rakuten hurler to do so - he got Kei Hosoya, Matt Duffy and Daichi Suzuki. He was the first person to do it against the other team's 3, 4 and 5 batters. [9]