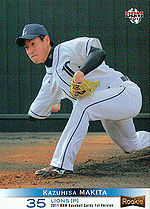 Kazuhisa Makita won the 2011 Pacific League Rookie of the Year Award. He pitched one season in the U.S. major leagues with the San Diego Padres in 2018.

Makita played for Nihon Tsuno in the industrial leagues after college. The Seibu Lions picked the submarine hurler in the second round in 2010. He began his rookie season, 2011, as a starter but became the closer in June. He was 5-7 with 22 saves, a 2.61 ERA and 0.95 WHIP and made the Pacific League All-Star team. He was 9th in the PL with 55 appearances and 4th in saves. He won the 2011 Pacific League Rookie of the Year Award with 150 votes, 107 more than runner-up Takahiro Shiomi and well ahead of heavily-hyped amateur star Yuki Saito. He was the third Rookie of the Year to have a 20-save season, following Koji Mise and Masafumi Hirai. He followed that with an outstanding season as a starter in 2012 when he was 13-9, 2.43.

On January 6, 2018, he signed a two-year contract with the San Diego Padres. He made his big league debut against the Milwaukee Brewers on March 30th, throwing an inning and a third of scoreless relief.

With an underhand delivery Makita throws a slider, curveball, sinker, and a fastball (tops out at 85 mph).