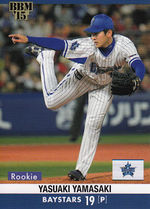 Yamasaki was 3-0 with a save and no earned runs (2 unearned) in 11 2/3 IP for Japan in the 2014 Haarlem Baseball Week. He was the only pitcher with multiple wins in the event and tied Tyler Jay for the most games pitched (5). He was not picked in the original 2014 NPB draft's first round class, but in the redraft phase he was taken by the Yokohama BayStars and Hanshin Tigers (both of whom had lost out on rights to Kohei Arihara). He wound up going to Yokohama and both he and Arihara would win Rookie of the Year honors in 2015.

In his NPB debut, he relieved Shun Yamaguchi with a 10-2 lead over the Yomiuri Giants March 28. He fanned Yoshinobu Takahashi then retired Yoshiyuki Kamei and Yasuyuki Kataoka to end the game. He set a NPB rookie record for saves in a month - 10 in May. Tsuyoshi Yoda had held the mark since 1990. In 2015 NPB All-Star Game 1, he relieved Tetsuya Yamaguchi with a 8-4 Central League lead over the Pacific League in the 9th. He allowed a single to Nobuhiro Matsuda and a RBI double to Sho Nakata then fanned Luis Cruz and got Yuki Yanagita on a grounder. Ginjiro Sumitani singled to make it 8-6 but Yamasaki whiffed Takuya Nakashima to end it. He broke more rookie records - the franchise record for saves by a rookie (21, Tomoya Mikami, 2014) and the NPB record for saves by a rookie (31, Yoda, 1990). He finished the 2015 season at 2-4 with 37 saves and a 1.92 ERA. In 56 1/3 innings, he fanned 66 and allowed only 11 walks and 38 hits. He finished third in the Central League in saves, four behind Tony Barnette and Seung-hwan Oh. He would win the 2015 Central League Rookie of the Year handily, with 241 of 270 votes (Shunta Wakamatsu was second with 20).

The Tokyo native then made the Samurai Japan roster for the 2015 Premier 12. He was excellent, retiring all nine batters he faced, three by strikeout, but he was bypassed in their critical semifinal 9th-inning bullpen blowup against South Korea as Takahiro Norimoto, Yuki Matsui and Hirotoshi Masui gave up 4 runs to blow a 3-0 lead. Japan got the Bronze.