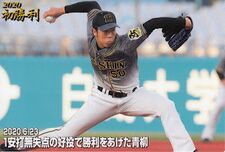 Koyo Aoyagi has made multiple All-Star teams. He throws both sidearm and submarine.

Aoyagi was the 5th-round pick of the Hanshin Tigers in the 2015 NPB draft. [1] He was 4-5 with a 3.29 ERA for Hanshin in 2016, with only 41 hits in 68 1/3 IP but walking 40. He was the third player in Nippon Pro Baseball history to win his debut start in an interleague game, following Yu Darvish and Kenji Otonari. [2] Oddly, his first NPB hit was a bunt, off Kazuto Taguchi. [3] He was 2-0 with a save and a 1.69 ERA in the Asia Winter League, following Yuta Iwasada as the second straight Hanshin pitcher to be named AWL Pitcher of the Year. [4]

He is on Japan's team for the Tokyo Olympics. [8] He made two appearances for the Gold Medal winners. In the opener, he relieved Yoshinobu Yamamoto in the 7th of a scoreless game with the Dominican Republic. He allowed a single to Juan Francisco, struck out Johan Mieses, gave up another single (to Erick Mejia), retired Jeison Guzmán then gave up a two-run double to Charlie Valerio. He walked Gustavo Núñez and Kaima Taira came in to escape further damage. He got a no-decision when Japan rallied. His other game was also rough; succeeding Suguru Iwazaki in the 5th with a 3-3 tie against Team USA, he allowed hits to Eddy Alvarez and Tyler Austin then a three-run dinger for Triston Casas. Todd Frazier singled before Aoyagi got his first out, Eric Filia. Mark Kolozsvary singled then Jack López hit into a double play. Kodai Senga took over; Japan again rallied to save him from taking a loss. His 27.00 ERA was third-highest in the Olympics, after Oliver Pérez and Alex Katz. [9]