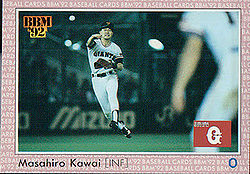 Masahiro Kawai was an infielder for 23 years in Nippon Pro Baseball, primarily with the Yomiuri Giants. Known for his defense and bunting, he won several Gold Gloves, made two All-Star teams and set several sacrifice hit records.

In 1991, the Yomiuri shortstop took home his third Gold Glove while hitting .251/.330/.312 with a career-best 36 RBI. He laid down 66 successful sacrifice hits, breaking his own record; his mark would later be topped by Shinya Miyamoto. The next year, Masahiro had a .258/.312/.345 and led the CL with 42 sacrifice hits. Takahiro Ikeyama broke his Gold Glove run at short.

Masahiro batted .256/.301/.327 during the 1998 season and he failed to reach 100 games played for the first time in six years as Daisuke Motoki was used regularly at short; Kawai remained the starter. He became the chairman of the board of the Japan Professional Baseball Players Association that winter; he would hold the job for three years before Kazuyoshi Tatsunami took his place.

In 2002, the 37-year-old produced at a .219/.246/.289 rate in 132 AB over 88 games, backing up Nioka at short, Motoki at third and Toshihisa Nishi at second base. In the 2002 Japan Series, he played one game at third as a defensive sub. His brightest moment may have been in 2003; though he hit only .238/.247/.300 in 80 AB over 72 games and was rarely playing short (primarily subbing for Akira Eto and Motoki at third), he won national acclaim when he laid down his 512th career sacrifice hit. This broke Eddie Collins' world record and got significant media attention in Japan. Robert Whiting, perhaps using a fair bit of hyperbole, says that it "was greeted with as much fanfare as if he had surpassed the home run record. There were fireworks on the Tokyo Dome electronic scoreboard and a flowery ceremony involving Kawai's wife and children, accompanied by tears of joy all around." Yomiuri then tried to pressure him to retire but he refused and the club released him after 20 years with them.

Kawai retired after the 2006 season and was hired by Chunichi as a coach.

Sources: Japanbaseballdaily.com by Gary Garland, The Meaning of Ichiro by Robert Whiting