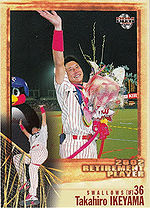 After his playing career, Ikeyama has worked as a baseball commentator for NTV and as a hitting coach for the Rakuten Golden Eagles.

Orestes Destrade said Ikeyama "could have definitely played in the Major Leagues." Jack Howell called him a "big-league shortstop" with "an absolute cannon from short and incredible range." Howell also remembered Ikeyama as a happy, joking player.