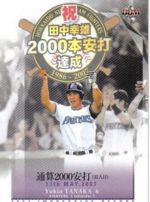 For the pitcher by the same name, please click here.

Yukio Tanaka is a former Olympic performer who won five Gold Gloves at shortstop, was named to the Best Nine four times and made nine All-Star teams. He set the career home run record for the Nippon Ham Fighters, showcasing his rare combination of power and glovework for a middle infielder.

In 1993, the 25-year-old batted .253/.294/.401. He led the Pacific League with 32 doubles, but also with 17 double plays ground into. The next year, Tanaka made a sharp improvement, hitting .286/.338/.506 with 29 doubles, 27 home runs and 87 RBI. He made his fifth All-Star team and finished third in the PL in homers behind Ralph Bryant and Hiroo Ishii. Tanaka failed to make the Best Nine as he was an outfielder that year; Tetsuro Hirose took his spot at shortstop and on the Best Nine. Makoto Sasaki, Ichiro Suzuki and Kevin Reimer were the Best Nine picks in the outfield.

Hirose moved to third in 1995 and Tanaka reclaimed shortstop. He had his best year in terms of raw offensive stats, producing at a .291/.368/.506 clip with 76 runs, 28 doubles, 25 home runs, 58 walks and 80 RBI. He tied Darrin Jackson for second in doubles (one behind Lee Stevens), tied four others for third in home runs (behind Hiroki Kokubo and Troy Neel), tied So Taguchi for second in runs (behind Ichiro Suzuki) and tied Ichiro Suzuki and Kiyoshi Hatsushiba for the PL RBI lead. It was the lowest RBI total ever to lead the Pacific League (as of 2007). He made his sixth All-Star team, won his fourth Gold Glove and was picked for his third Best Nine. From June 7 through September 21, he had 339 consecutive errorless chances, the PL record.

Tanaka remained productive in 1996, batting .277/.344/.474 with 22 HR and 82 RBI. He again was one double away from leading the league, as his 29 tied Tuffy Rhodes for second, one behind Kazuhiro Kiyohara. Yukio made his fourth Best Nine and his 7th All-Star team. His six sacrifice flies led the league and he won his fifth Gold Glove.

By May 5 of 2007, a resurgent Tanaka had already matched his hit total from the entire 2006 season (15) and his 3 homers were tied for second on the Fighters. He was quickly closing in on joining the meikyukai. On May 17, he joined the meikyukai with a 3-for-4 day. The 47th member of the meikyukai, he was the second-slowest to that point, taking 2,205 games. Only former teammate Yasunori Oshima had taken longer. Tanaka reached the milestone only 11 days after another player, Hideki Matsui. He did so at Tokyo Dome, which served as his home stadium for 16 years from 1988-2004. In his final Tokyo Dome appearance, on September 19, Tanaka helped Nippon Ham clinch a playoff berth and drove in a key run in the 4th inning. He got a standing ovation. In 2007, he hit .222/.250/.363 in 55 games then was 0 for 1 in the 2007 Japan Series to wrap up his career.

Tanaka was offered to be a hitting coach for Nippon Ham in 2008 but he turned down the deal to review his options.