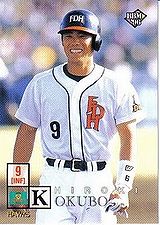 Hiroki Kokubo was a star infielder for the Daiei Hawks for years.

Before he began his professional career, he was with the Japanese national team when they won the Gold Medal in the 1993 Asian Championship and the Bronze Medal in the 1993 Intercontinental Cup. He hit .350/.364/.550 with 9 RBI in 11 games in the latter event. He split third base with Naoki Matsumoto but fielded only .786 there. He also split action in left field with a couple other players, handling 10 chances without an error. In the semifinals, he was 2 for 4 with a run against John Powell as Japan's cleanup man and left fielder in an upset loss to Team USA. In the Bronze Medal Game win over Nicaragua, he again hit 4th and played left field. He was again 2 for 4 with a run.

1998 was not a good year for Kokubo. A tax fraud scandal that year led to several players losing practically the whole season. Kokubo was the most prominent player caught and he only played 17 games all year.

In '99, Kokubo returned but looked rusty. He hit .234/.323/.449 with 24 HR and this was less valuable as he was now a 1B/3B, moved off of second. The next season Kokubo moved full-time to third, where he has been located since. He returned to form with a .288/.340/.552 year, finishing third in the PL with 105 RBI but losing a Best Nine chase to Norihiro Nakamura. Kokubo was on his only Japan Series-winning team that year.

Kokubo kept hammering away in 2002. He hit .292/.375/.531 with 32 long balls. It would be his last year for the Hawks. He sat out the entire 2003 season with a knee injury he suffered during a home plate collision with Takumi Shiigi in spring training. The team didn't miss him, as Kenji Johjima, Nobuhiko Matsunaka and Tadahito Iguchi led a strong offense to a Japan Series victory.

Daiei, figuring it no longer needed Kokubo or his salary, traded him to the Yomiuri Giants for nothing. That's what we call a salary dump. The team's fans were irate over the move and flooded the phone lines with protests. Kokubo proved them right with a resurgent 2004 for Yomiuri, winning Comeback Player of the Year honors. He hit .314/.372/.641 with 41 HR (4 behind league leaders Rhodes and Tyrone Woods) and 96 RBI. His slugging was second in the league to Greg LaRocca, who played in a hitter's park. Amazingly, Kokubo still couldn't make his third Best Nine, as Kazuyoshi Tatsunami got the spot in the Central League. He was second on homers for a team that set a new Nippon Pro Baseball record.