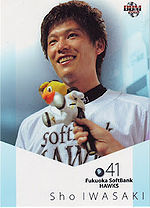 Iwasaki improved to 6-2, 2.72 for Softbank in 2011. He was not used in the 2011 Japan Series, which Softbank won in 7 games over the Chunichi Dragons. In the 2011 Asia Series, he beat the Perth Heat, combining with three relievers on a shutout. Koji Akiyama called him back to start in the finale on one days' rest. He shut out the Samsung Lions for four innings but then faded in the 5th and took the loss, the first time a NPB team failed to win the Asia Series.