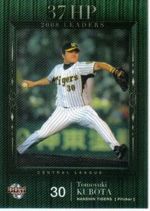 Tomoyuki Kubota has been a good relief pitcher in Nippon Pro Baseball.

In 2005, Kubota moved to the closer's role and Hanshin formed the JFK bullpen - Jeff Williams, Kyuji Fujikawa and Kubota. Kubota had the highest ERA of the group in '05 at 2.12. He was 5-4 with 27 saves. In 80 2/3 innings, he struck out 97 while walking only 15. He was third in the Central League in saves behind Hitoki Iwase and Hirotoshi Ishii. Kubota tossed one scoreless inning in the 2005 Japan Series. Kubota was a late addition to Japan's team for the 2006 World Baseball Classic, replacing the injured Hiroki Kuroda.

Tomoyuki was 5-7 with 16 saves and a 3.96 ERA in 2006, losing the closer job to Fujikawa. He was 5th in the CL in saves. Kubota had a record-setting campaign in 2007, when he set NPB records with 90 appearances and 46 holds. He went 9-3 with a 1.75 ERA and made his first CL All-Star team. In the first 2007 NPB All-Star Game, Kubota teamed with Koji Uehara, Shingo Takatsu, Masanori Hayashi, Atsushi Kizuka, Hitoki Iwase, Hiroki Kuroda, Marc Kroon and Fujikawa on a one-hit shutout of the Pacific League All-Stars. Kubota again had the highest ERA of the JFK bullpen despite his impressively low total. He was named the Setup Man of the Year.