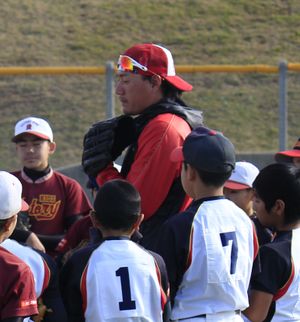 Hayashi's shoulder was injured in 2007 and he was 2-1 with 3 saves and a 3.29 ERA in 41 games (38 1/3 IP). In the first All-Star game of that season, he teamed with Koji Uehara, Shingo Takatsu, Atsushi Kizuka, Hitoki Iwase, Tomoyuki Kubota, Hiroki Kuroda, Marc Kroon and Kyuji Fujikawa on a one-hit shutout of the Pacific League All-Stars. He decided to have the bone spur surgery following that campaign. He struggled with control issues in 2008, walking 14 in 10 2/3 IP; he had a 6.75 ERA and no decisions and spent much of the year in ni-gun.

Hayashi was traded with Tomohiro Nioka to the Nippon Ham Fighters for Micheal Nakamura and Takahito Kudoh. He went 3-2 with a 3.32 ERA in 46 games for Nippon Ham in 2009, holding left-handed batters to a .167 average (righties hit .261). He pitched in five of six games in the 2009 Japan Series, which Nippon Ham lost to Yomiuri. In game five, he allowed a game-tying single in the 8th to platoon specialist Noriyoshi Omichi.