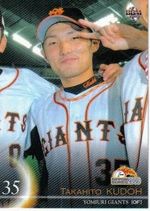 Takahito Kudoh is an outfielder who has played for two different Japan Series entries.

Kudoh hit .250/.294/.313 as Japan's center fielder in the 2002 World University Championship, stealing two bases in three tries. He played for Japan Rail Higashi Nihon in the industrial leagues after college. Turning pro with the Nippon Ham Fighters, he was 0 for 13 with six strikeouts in 2005. After a year in the minors, he batted .288/.329/.353 with 9 steals in 10 tries in a part-time role (72 games) in 2007. He was Nippon Ham's starting left fielder in the 2007 Japan Series, hitting .250/.294/.375, outperforming more acclaimed outfield starters Atsunori Inaba and Hichori Morimoto in a loss to the Chunichi Dragons.

The Fighters then dealt the light-hitting Kudoh with closer Micheal Nakamura to the Yomiuri Giants in exchange for pitcher Masanori Hayashi and infielder Tomohiro Nioka. Kudoh only had 56 plate appearances in 49 games for the Giants in 2009, seeing little time behind a talented outfield quartet of Tetsuya Matsumoto, Alex Ramirez, Yoshitomo Tani and Yoshiyuki Kamei. Kudoh played one game as a defensive sub in left in the 2009 Japan Series, won by Yomiuri over his old Nippon Ham mates.