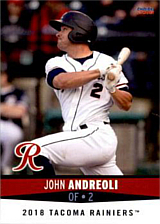 Speedy outfielder John Andreoli began his professional career in 2011. He was taken by the Chicago Cubs in the 17th round of the 2011 amateur draft. The scout was Matt Sherman.

2015 was his first trial at Triple A. He batted .277/.372/.401 with 33 swipes in 106 games for the Iowa Cubs. In 2016, he returned to Iowa, where he hit .256 with 43 stolen bases in 140 games. He was on the roster of the Italian national team for the 2017 World Baseball Classic. He spent a third season at Iowa that year, hitting .244 in 119 games, then became a free agent after the season and signed with the Seattle Mariners. After starting 2018 with the Tacoma Rainiers, he was called up to the bigs on May 23rd after a number of injuries depleted the bench and the team needed an outfielder. He started that night's game against the Oakland Athletics in right field, batting 8th and going 1 for 3 with a walk in a 1-0 win. John ultimately played 3 games total with Seattle, then was claimed by the Baltimore Orioles for 23 games to close the '18 campaign. He spent the ensuing 370 days bouncing (in order) from Baltimore back to Seattle to Texas to San Francisco to Minnesota back again to Seattle before becoming a minor league free agent, seeing no big league action in 2019.

His cousin is pitcher Daniel Bard (his mother is the sister of Daniel's mother). By connection, he is also related to Luke Bard (cousin), Paul Bard (cousin's father), Fran O'Brien (grandfather) and Kevin O'Brien (uncle).