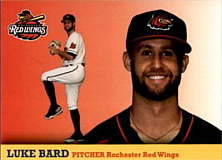 The brother of big leaguer Daniel Bard and son of minor leaguer Paul Bard, pitcher Luke Bard was selected by the 16th round of the 2009 amateur draft. He did not sign, opting to attend Georgia Tech instead. He was then chosen by the Minnesota Twins in the supplemental first round of the 2012 amateur draft. He soon signed and made his pro debut that summer with the GCL Twins. On December 14, 2017, he was drafted by the Los Angeles Angels of Anaheim in the 2017 Rule V Draft. He made his major league debut with the Angels on March 31, 2018, pitching one scoreless inning in relief. He made 40 appearances for the Halos in the next two years, pitching to a 4.90 ERA in between being returned to the Twins and pitching in Triple A during the '18 season.

His grandfather, Fran O'Brien, was head coach at Massachusetts Institute of Technology and College of the Holy Cross. His uncle, Kevin O'Brien, played minor league baseball. He is also a cousin of John Andreoli.