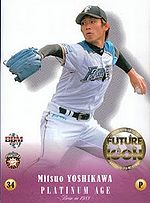 Mitsuo Yoshikawa has been a pitcher in Nippon Pro Baseball.

Yoshikawa was a first-round pick of the Nippon Ham Fighters out of high school. He went 4-3 with a 3.66 ERA in 2007, with 46 walks in 93 1/3 innings. In the 2007 Japan Series, the 19-year-old relieved Ryan Glynn in game two but walked two batters following three free passes issued by Glynn to set a Japan Series record for one team in one inning. Two games later, manager Trey Hillman gave Yoshikawa the ball, only the 5th rookie out of high school to start a Japan Series game and the first since Kazuhisa Ishii. Yoshikawa again struggled with his control, taking the loss to the Chunichi Dragons (who would win the Series). Overall, he allowed seven walks, three hits and three runs (two earned) in six innings in the Series.

With an overhand delivery Yoshikawa throws a slider, curveball, and a fastball (tops out at 94 mph).