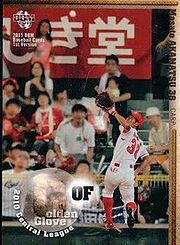 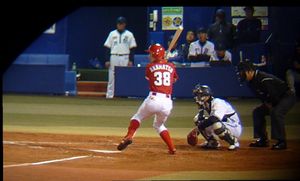 Masato Akamatsu made highlight reels around the world in 2010.

Akamatsu was a sixth-round draft pick by the Hanshin Tigers in 2004. He led the minor Western League in average, OBP, runs and stolen bases in 2005, average and OBP again in 2006 and steals in 2007. In the meantime, he was seeing a little action with Hanshin's top club, scoring one run as a pinch-runner in 2005 and going 2 for 14 with two steals and a run in 2006. In 2007, he went 6 for 39 with a double, two walks and eight steals (in 9 tries). After Hanshin signed Takahiro Arai, Akamatsu went to the Hiroshima Carp as compensation. Hiroshima plugged him into center field, which he split with Soichiro Amaya. He hit .257/.317/.363 with 12 steals in 14 tries in 2008. His first two home runs were both leadoff homers, both against the same team (the Yomiuri Giants); no player in NPB had ever done that before. Seth Greisinger surrendered the first dinger.

Akamatsu fell to .232/.289/.324 in 2009 with 14 stolen bases and 7 times caught, yet made the Central League All-Star team. The Kyoto native improved to .285/.307/.388 in 2010 with only 8 walks in 320 plate appearances. He stole 20 bases while being caught just four times. He tied Masahiro Araki for 5th in the CL in swipes, behind Eishin Soyogi, Takahiro Ishikawa, Ryota Wakiya and Kazuki Fukuchi. On August 4, he drew worldwide notice for a catch. Yokohama BayStars slugger Shuichi Murata cracked a seeming home run drive to left-center. Akamatsu raced back, climbed to the top of the wall and made a backhand grab to snare the ball and rob Murata of the homer. He won a Gold Glove, joining Norichika Aoki and Jun Hirose as the selected outfielders in the CL.