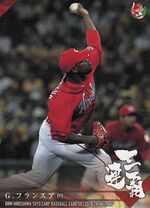 Pitcher Geronimo Franzua only had a brief career in the minor leagues, never making it further than the Dominican Summer League, but found some success a number of years later in Nippon Pro Baseball.

Franzua was first signed by the Houston Astros on September 23, 2010, and made his professional debut the following season with the DSL Astros. He spent three years with that team, from 2011 to 2013, going 0-6 as a starter the first year, then 0-0, 8.10 as a reliever the second, and 1-3, 4.42 mainly as a starter the third. He never made it to the United States and was released on January 7, 2014. That would normally have been the end of a totally unremarkable professional career, but he found an unlikely second wind that began when he was recruited by the Dominican Academy of the Hiroshima Toyo Carp in 2014. He did well enough to earn a ticket to Japan where he first had to prove his mettle in the independent Shikoku Island League.

In 2018, he turned up in NPB, with Hiroshima. He went 3-1, 2.25 in 9 games with the team's ni-gun squad in the Western League and 3-4, 1.66 in 47 games for the senior squad in the Central League and even received some sown-ballot support in the voting for the 2018 Central League Most Valuable Player Award. He pitched in the Japan Series that year, against the Softbank Hawks. In Game 2 on October 28th, he combined with Kris Johnson and Shota Nakazaki on a 5-1 win which was Hiroshima's sole win in the Series. In game 5, however, he gave up a game-tying homer to Kenji Akashi in the 7th in a game the Carp eventually lost. He continued to do well over the following seasons, with a record of 8-6, 2.76 and 12 saves in 2019, when he played in the NPB All-Star Game and was tied for 5th in the Central League in games pitched. During the season, he took over as Hiroshima' scloser from Shota Nakazaki. In 2020, he was 2-3, 2.45 in 53 games with 20 saves. However, he slumped badly in an injury-filled season in 2021 whose start was delayed by a positive COVID-19 test prior to his departure from the Dominican Republic. He finished at 1-2, 9.53 in 8 games and only made 3 appearances at the top level in 2022, with an ERA of 8.10. He also pitched in the Western League both seasons.

His unusual last name may be a transcription into Spanish of the French "François", which is a common last name is neighboring Haiti and is pronounced almost identically.