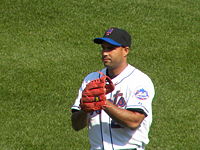 Raúl Valdés made his major league debut at age 32.

He pitched for La Habana in the Cuban Serie Nacional. In 1998-1999, he led the league with 193 hits allowed. He was the winning pitcher in the 2001 All-Star game, beating Eliecer Montes de Oca as the Occidentales won the contest.

His winter ball stardom earned him another look in Organized Baseball after a two-year absence. The veteran southpaw was back with the Mets chain with the AAA Buffalo Bisons to begin 2010. About a week into the season, he was called up to the majors to replace the injured Sean Green. He became the third veteran hurler over age 30 to debut in the majors as a reliever for the Mets, following Hisanori Takahashi and Ryota Igarashi of Japan. In his debut, he relieved Johan Santana in the 6th and retired his first four batters in The Show - Josh Willingham, Ian Desmond, Wil Nieves and Adam Kennedy. Facing fellow Cuban defector and pitcher Liván Hernández (only 2 years older despite being in his 15th MLB season), he allowed his first hit. Nyjer Morgan followed with a single but Valdés escaped without further harm. He was replaced by pinch-hitter Frank Catalanotto after two shutout innings.