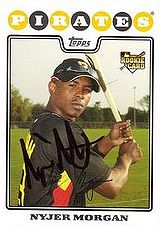 At the age of 16, Nyjer Morgan left home to play junior hockey, which he did four years, reaching as high as as the Western Hockey League. He was drafted by the Colorado Rockies in the 42nd round of the 1998 amateur draft out of high school but did not sign. Nyjer was picked then by the Pittsburgh Pirates as a draft-and-follow selection in the 33rd round of the 2002 amateur draft. He was signed by scout Kevin Clouser and made his pro debut in 2003.

In 2003, Morgan debuted with the Williamsport Crosscutters and hit .343/.439/.399 with 26 steals in 43 tries. He made the New York-Penn League All-Star team as an outfielder and was picked as the league's #8 prospect by Baseball America. He had finished second in average behind only Vito Chiaravolloti and led the league in hits (92) and sacirifce bunts (10) as well as times caught stealing.

Morgan was hurt by the presence of many similar singles-hitting speedy outfielders in the Pirates system, including Chris Duffy, Rajai Davis, Vic Buttler and Rich Thompson.

Morgan started 2007 by hitting .308/.379/.338 for the Indianapolis Indians in 34 games, stealing 22 bases in 26 tries and scoring 24 runs. He was leading the International League in stolen bases at the time. In mid-May, he tore the ulnar collateral ligament in his left thumb while sliding into a base. On May 15, he had surgery and was expected to miss 8-10 weeks. He returned late in the year, batting .308/.438/.538 in a 4-game rehab stint with the GCL Pirates and finishing with a .305/.374/.354 line in 44 games for Indianapolis, stealing 26 in 33 tries. He joined the Pirates as a September call-up and debuted the same day as Steve Pearce. Morgan entered in the 6th inning as a defensive substitute in center field, with CF Nate McLouth moving to left field to replace Jason Bay. Nyjer had an infield single the next inning against Matt Wise and scored on a hit by Freddy Sanchez. He drew a walk later in the game. The next day, Morgan started in center, batting leadoff.

Morgan dazzled defensively on September 9 with a catch against ex-Pirate Aramis Ramirez. Starting from 15 feet into left-center (playing Ramirez to pull), he ran all the way to the left edge of the Roberto Clemente Wall in right field, dove into the air and backhanded the ball in mid-air. Pitcher Matt Morris said it was better than any catch he had seen Jim Edmonds make when they were teammates St. Louis and added "The speed Nyjer showed to close like that...the way Ramirez's ball was tailing away from him the whole time, the full extension...That play justy doesn't get made. It's one of the best catches I've seen." Ramirez said "I never thought he'd get it." The fans reacted with a roar of approval that lasted several minutes.

Morgan led off games on September 19 and September 20 with a triple. It was the first time a Pirate had done that since Omar Moreno in 1980. No National League player had done it in the past five years. He hit .299/.359/.430 with 7 steals in 10 tries as Pittsburgh's starting center fielder after his call-up, with a 105 OPS+.

When manager Jim Tracy was let go by Pittsburgh, Morgan lost a key supporter. He battled with Nate McLouth for the center field job in spring training of 2008, losing the competition. While McLouth was hot in April, Morgan saw little playing time and played poorly, only hitting .161/.257/.194 with 1 steal in 3 tries. He was sent down in early May and replaced on the roster by Jason Michaels.

Morgan had a very good season for the Milwaukee Brewers in 2011, hitting .304 as the Brewers won the NL Central title for the first time. However, he started the 2012 season with 138 plate appearances without a RBI, until he hit a homer off Kevin Correia of the Pittsburgh Pirates on June 1st. He set a record for most plate appearances without driving in a run at the start of a season, beating the 125 by Herb Adams in 1950. He finished the year batting .239 in 122 games, with only 16 RBI. He was clearly eclipsed by teammate Carlos Gomez, who had shared duties in center field with him for two years and who finally had a season that reflected his great tools. As a result, the Brewers showed little interest in keeping him after the season. He chose instead to head to Japan.