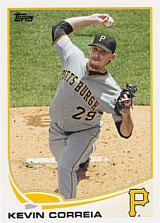 Kevin Correia pitched thirteen seasons in the big leagues, making the All-Star team with the Pittsburgh Pirates in 2011.

From the San Diego area, Correia's family is of Portuguese background and were fishermen in the Point Loma area. Kevin first came up to the majors with the San Francisco Giants in 2003. He shuttled between the Giants and the minor leagues in his first three seasons, also filling in where needed between the bullpen and the starting rotation. He made it to San Francisco for good in 2006, when he pitched 48 times, all as a reliever, with a record of 2-0, 3.49. He spent most of 2007 pitching mainly in relief, but making 8 starts among his career high 59 appearances, going 4-7, 3.45. Things went downhill in 2008, as he fell to 3-8, 6.05 in 25 games, 19 starts and 110 innings, a personal best at the time.

Correia signed with his hometown Padres before the 2009 season and spent a full season in a starting rotation for the first time, making 33 starts. He posted a record of 12-11, 3.91 as one of the team's most consistent starters. He pitched 198 innings, with 142 strikeouts against 64 walks, He could not repeat in 2010, his ERA shooting up to 5.40 in 28 games, even though his record remained decent at 10-10. He became a free agent again after the season and signed with the Pittsburgh Pirates for 2011. He had a solid first half, with a record of 11-7, 4.01 for the surprisingly competitive team, and was named to the All-Star team for the only time, but his season ended poorly. When he was shut down in August, he had fallen to an overall 12-11, 4.79 in 27 games. The Pirates bolstered their rotation before the 2012 season, adding veterans A.J. Burnett and Erik Bedard, and Correia was relegated to a role akin to sixth starter after Wandy Rodriguez was acquired at the trading deadline. On August 19th, he was used in relief for two innings in the Bucs' 19-inning marathon win over the St. Louis Cardinals. With the Pirates depleting their staff, he volunteered to start the next day's game in San Diego, becoming the first Pirates' pitcher since Pascual Perez in 1981 to start a game one day after appearing in relief. He pitched gamely, going 4 1/3 innings and allowing three runs before being relieved by Tony Watson, the only Pirates' pitcher who was not used the previous day. He finished the season with a record of 12-11, 4.21 in 32 games (28 starts), pitching 171 innings. A free agent yet again, he signed a two-year deal with the Minnesota Twins for $10 million.

Correia made 31 starts in the 2013 season, going 9-13 with a 4.18 ERA. In 24 starts for the Twins in 2014, his results were even more mixed, going 5-13, 4.94. On August 9th, he was traded to the Los Angeles Dodgers for a player to be named later. The Dodgers were looking for someone to replace swingman Paul Maholm, whose season ended via a torn knee ligament. Kevin was a winner in his first outing, defeating the Atlanta Braves, 6-2, on August 11th. He ended up going 2-4 in 9 games, making his season's record 7-17, 5.44. In 2015, he went to spring training with the Seattle Mariners but was released, then signed with San Francisco. He was assigned to the AAA Sacramento RiverCats where he pitched well, putting up an ERA of 3.68 in 6 starts. On June 8th, he was signed and brought to the major leagues by the Philadelphia Phillies, taking the rotation spot of rookie Severino Gonzalez, who had put up an 8.69 ERA in 5 starts. In his swan song, he was 0-3, 6.56, earning his release in July.