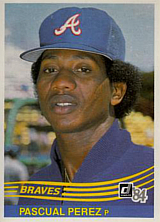 In 1988, Pascual Pérez pitched a rain-shortened five inning no-hitter while playing for the Montreal Expos. His brother, Melido Pérez, also pitched a rain-shortened no-hitter in 1990. Because both were less than nine innings, they are deemed unofficial. Pascual is also the brother of former pitcher Carlos Pérez and and former minor leaguers Valerio Pérez, Vladimir Pérez, and Dario Pérez.

Perez was one of the more colorful players of the 1980s. His personal appearance, with a gap-toothed smile and long curls, stood out during the era, and he was always a bit of a flake. Originally signed by the Pittsburgh Pirates in 1976, he reached the major leagues with them for a couple of games in 1980, then became a member of their starting rotation after the 1981 strike, when he made 17 appearances, going 2-7, 3.96 for the 1981 Pirates. On June 30, 1982, he was traded to the Atlanta Braves for Larry McWilliams and a player to be named.

He was immediately inserted in the Braves' starting rotation and became a sensation thanks to an incident on August 19th. With the Braves in a terrible losing streak, he was scheduled to start against the Expos that day, and having just earned his driver's license, set off behind the wheel for Atlanta-Fulton County Stadium in a rental car. However, unfamiliar with the highways around Atlanta, he got lost, circled around the city for a couple of hours, before ending up at a gas station where he asked for help (and $10 worth of gas, since, in typical fashion, he had forgotten to bring along his wallet). By then, the game had started, as veteran knuckleballer Phil Niekro took the mound instead. When he finally made it to the ballpark, Perez thought he would be sent back to the minors for his offense, but manager Joe Torre and his teammates were more amused than anything, offering him a warmup jacket with the number I-285 in honor of the bewitching highway - it helped that the Braves had won the game Perez was supposed to pitch - and Torre fined him a symbolic 100 pesos. He ended up as one of the Braves' most reliable starters that year, going 4-4, 3.06 in 16 games, and started Game 1 of the NLCS against the St. Louis Cardinals on October 7th; an earlier attempt to play the game, with Niekro on the mound, had been wiped out by rain after four innings with the Braves leading. Perez gave up 4 runs in 5 innings as the Braves lost, 7-0. He came back to pitch in relief in Game 3 three days later, giving up a single run in 3 2/3 innings while the Cardinals completed a three-game sweep.

Pascual had a great year in 1983, going 15-8 with a 3.43 ERA, pitching 215 1/3 innings and striking out 144 batters. He was one of many young pitchers named to the All-Star team by Cardinals manager Whitey Herzog. He did pitch in the Midsummer Classic, but gave up 2 runs on 3 hits and a walk in two-thirds of an inning and was relieved by Jesse Orosco. The Braves just fell short of winning a second division title that year. In 1984, he missed the beginning of the season after getting into legal trouble over drugs back in the Dominican Republic, but had an almost identical year, with a record of 14-8, 3.74, and 145 strikeouts in 211 2/3 innings. He also developed a reputation as a bit of a headhunter, culminating with his role at the center of an epic brawl with the San Diego Padres on August 12th. That day, he drilled Padres leadoff hitter Alan Wiggins with his first pitch of the game, and things got crazier from there, with the Padres pitchers throwing at him all four times he batted, and a huge bench-clearing fight even involving some spectators breaking out before things were over. The Braves started to fall back in the standings that year, and Pascual gave them a firm push downhill in 1985 when he had an absolutely dreadful season, finishing 1-13, 6.14 in 22 starts. At the end of spring training in 1986, the Braves handed him his unconditional release and he did not pitch at all in organized baseball that season, amid rumors of substance abuse. A once-promising career appeared over.

In 1987, the Montreal Expos were racked by defections through free agency and decided to address the issue by rounding up a bunch of pitchers who had once been good but had fallen by the wayside for one reason or another, hoping to find a pearl among them. Names like Bruce Berenyi, Len Barker, Lary Sorensen and Mike Jones hung around the team in spring training, as did Perez, signed as a free agent and assigned to the Triple A Indianapolis Indians to start the year. He went 9-7, 3.79 in 19 starts for the Indians, showing that he still had major league stuff. He led the American Association in ERA. The Expos had brought up another of these reclamation projects, Dennis Martinez, earlier in the season, and he had been a godsend. On August 22nd, it was Perez's turn to redeem himself in The Show. He gave up 3 runs in 5 innings in his first start, earning a chance to pitch again. On August 28th, he pitched 9 innings against the Los Angeles Dodgers, giving up only an unearned run, in a game the Expos won, 2-1, in 12 innings. A star was re-born: from then until the end of the year, he was the best pitcher in the National League, winning 7 consecutive starts with an ERA of 2.20. He gave the Expos a tremendous boost, placing them in a completely unexpected pennant race with the Cardinals, which lasted until the season's last week when the Expos were swept in a doubleheader at Busch Stadium. Perez got a no-decision in his last start of the year, ending at 7-0, 2.30, with the Expos winning his first 9 starts before losing the final game of the season.

Montreal fans liked extroverts, and Pascual was an instant hero there. He had a ton of quirks, including the fact that he would throw around 10 different pitches in any game, even though he could probably have gotten by on his fastball and change-up only. He developed a sort of eephus pitch, a slow looping curveball that he would flash at a couple of hitters every game. He had an exaggerated high leg kick, would shoot an imaginary gun with his fingers after a strikeout, and would sprint to and from the mound. His pick-off moves were just as bizarre, including one where he would throw the ball between his legs to the first baseman. He was a good athlete and a fast runner, getting to pinch run a number of times, but he was an appallingly bad hitter (he went 2 for 58 in 1988), but somehow would approach the plate with great purpose, as if he was expecting to jerk a pitch into the stands at any time. In a more conservative city, he would have rubbed people the wrong way, but in Montreal, he was a star.

His second season with the club was another excellent one, with a record of 12-8, a 2.44 ERA and a pair of shutouts, including the rain-shortened no-hitter against the Philadelphia Phillies at Veterans Stadium on September 24th. He missed some time due to injury in May and June, limiting him to 27 starts, and would have had a better record had he received decent run support. The Expos were preparing to contend in 1989, but Perez threw a spanner in the works when he was suspended in spring training because of his dabbling with cocaine a few years earlier. As a result, he started the season very slowly. He was 0-7 on May 20th, prompting the Expos to trade three promising young pitchers, including Randy Johnson, to the Seattle Mariners in return for veteran Mark Langston five days later. Perez turned it around completely, though, finishing the year at 9-13, 3.31, which led to a lucrative free agent contract with the New York Yankees.

Pascual was never healthy in the Bronx, going 3-6 over the next two seasons (although his ERA during that period was an excellent 2.87). In 1992, he was suspended by Major League Baseball a second time because of a positive test for cocaine (he had agreed to undergo such testing as part of his first suspension). Combined with his health woes, the suspension effectively ended his career. There was long speculation that he wanted to attempt a comeback, but it never materialized. He did return professionally briefly in 1996, going 4-1 with a 1.80 ERA for the China Times Eagles in Taiwan.

He was killed in 2012 in a botched robbery attempt at his home in the Dominican Republic; the thieves were apparently looking to get their hands on his major league pension check. He was struck on the head and suffered a fatal stab wound in his neck. He had been in poor health because of a kidney ailment before the incident that ended his life. Three days after his death, police announced that they had arrested three suspects and identified two others, confirming that robbery was the motive.