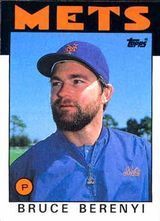 Bruce Berenyi was a hard-throwing right-hander with some control issues whose career was cut short by a rotator cuff injury.

The nephew of Ned Garver, Bruce was picked in the secondary phase of the 1976 amateur draft by the Cincinnati Reds out of Northeast Missouri State University. While in college, he tied a Division II record by striking out 21 batters in one game. He racked up an impressive minor league resume, leading the American Association in strikeouts in 1979 and 1980 for Triple A Indianapolis. He also led the circuit in ERA in 1979. After a brief major league call up in 1980, Berenyi had an inconsistent, but impressive rookie season for the 1981 Reds, leading the league in walks allowed, but also finishing sixth in strikeouts. In one game against the Los Angeles Dodgers, he threw 15 straight balls and walked 7 batters in 3 and 2/3 innings. Two weeks later, on June 6th, he threw a one-hitter against the Montreal Expos, striking out 10. He threw two two-hitters that season and finished tied for fourth in the Rookie of the Year voting. The 1982 Reds collapsed, falling into last place. Berenyi pitched well, but due to lack of run support, he led the National League in losses with 18. As the Reds struggled, Berenyi became the subject of trade rumors. The New York Yankees attempted to acquire him for Rick Cerone, but Cerone refused to waive his no-trade clause.

On June 15, 1984, the Reds traded him to the New York Mets for three minor leaguers - Eddie Williams, Jay Tibbs, and Matt Bullinger. Berenyi pitched well for the Mets in 1984, but throughout his career he had been pitching through shoulder pain and it finally caught up with him the following spring for the 1985 Mets, as he left his third start of the season after 2 innings. The diagnosis was dire - a slight tear of the rotator cuff, and he underwent season-ending arthroscopic surgery in May. Berenyi was able to make a rapid comeback, pitched well the following spring, and made the 1986 Mets as a long reliever. He was shifted back to the rotation in mid-May, but had clearly not fully recovered, putting up a 6.60 ERA as a starter. By the end of June, he lost his spot in the rotation. He was demoted to Triple A Tidewater to get more work immediately before the All-Star break, and never returned to the Mets or the majors. Following the season, Berenyi declared free agency and signed a minor-league deal with the Montreal Expos. He was only able to pitch three innings that spring before shoulder pain overtook him again, and he underwent a final, career-ending rotator cuff operation.