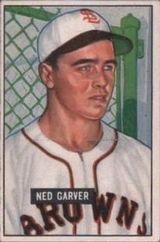 Despite being saddled with pitching for bad ball clubs almost his entire 14-year major league career, Ned Garver won 10 or more games eight times, a notable achievement for any hurler. However, his main claim to fame was being recorded as the hapless St. Louis Browns' last 20-game winner, and the only 20-game winner for a team losing 100 games. 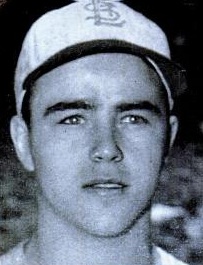 Garver began his professional career after impressing three club scouts, including P. L. McCormick with his pitching at a national amateur tournament in Youngstown, OH. In 1944 he went to spring training with the Browns and was optioned to Toledo. Not sure of his chances, he asked to be sent to a club nearer his home in eastern Ohio. The Browns obliged and transferred him to the Class D Newark club. As a result, he broke into organized baseball at age 18 with the Newark Moundsmen in the Ohio State League. Garver tore up the circuit with his pitching and his 1.21 ERA was the lowest in Organized Baseball. He also pinch-hit and played the outfield and drove in more runs than their catcher. He then played for the Elmira Pioneers of the Eastern League (1945); the Toledo Mud Hens of the American Association (1945); and San Antonio Missions of the Texas League (1946-1947).

He broke into the big leagues on April 28, 1948 with the Browns. He played for St. Louis from 1948 to 1952. On June 9, 1950, he turned the tables on the Boston Red Sox, winning 12–7. Even though losing, the Sox set a major league scoring record for three games at 56 runs. On June 30th that year, he lost the game because of his mental error against the Chicago White Sox. In what would have been the winning run in regulation, Garver was called out for his failure to touch third base when rounding it. He lost, 3–2, in 13 innings.

Working his way up to become the ace of the Browns, he got off to a fast start in 1951 and had won 11 games by the All-Star Game, in which he was the American League starter. In the game, he struck out in his one plate appearance and recorded a strikeout and a walk in 3 innings. At that point he got a boost from new Browns owner Bill Veeck, who never left a publicity stone unturned. To boost attendance, Veeck instructed manager Zack Taylor to give Garver every opportunity to win 20 for what was certain to be an eighth-place club.

"It was easy to do with Ned," admitted Veeck in his autobiography, "because he was also the best hitter on the team and there was never any reason to take him out for a pinch hitter in the late innings. There was almost nothing Ned could do to get knocked out of a game."

Veeck was not exaggerating about Garver's batting. He often batted sixth in the lineup, and in 1951 he hit .400 as a pinch hitter and .305 for the entire season. On September 30, 1951, preceding the Browns' season closer, the Harlem Globetrotters defeated a team led by baseball clown Max Patkin. The basketball game was played on a wooden court set up behind third base. Then Garver copped his 20th game of the season, defeating the White Sox, 9–5. Garver became the only player to win 20 for a last-place team that lost 100 games, as the Browns won just 32 other times that season. Garver won 38.5% of the Browns' games that year, the highest percentage between 1922 and 1972, and finished second in MVP balloting to Yogi Berra. Garver's sensational season made him the highest-paid player in Browns history with a salary of $25,000. Unfortunately, the road from there was mostly downhill.

On October 16th, in a letter written to MLB officials, Garver offered a pay plan that would ameliorate the ill effects of the reserve system he supported. He would have the salaries of players on consistent tail-enders be determined by a rating system by the owners. If the club does not match the "average" salary, then that player should be traded to some other club that can afford his services. Garver added that "I don't care where I play, as long as I get a 'fair' salary."

On August 14, 1952 Garver was traded by the Browns with Bud Black, Jim Delsing and Dave Madison to the Detroit Tigers for Dick Littlefield, Marlin Stuart, Don Lenhardt and Vic Wertz and was with Detroit from 1952 to 1956. On December 5, 1956 he was traded by the Tigers with Wayne Belardi, Gene Host, Virgil Trucks and $20,000 to the Kansas City Athletics for Jim Finigan, Jack Crimian, Bill Harrington and Eddie Robinson and was with Kansas City from 1957 to 1960.

On December 14, 1960 he was drafted by the Los Angeles Angels from Kansas City in the 1961 expansion draft. He he played his final major league game for the Angels on June 4, 1961. On June 10th, he was released by Los Angeles, ending his baseball career at age 35. 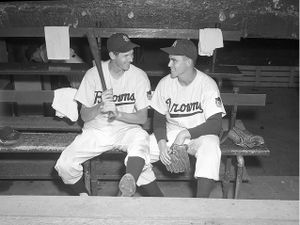 Only seven pitchers in the 20th century - Garver, Noodles Hahn, Scott Perry, Howard Ehmke, Sloppy Thurston, Steve Carlton and Nolan Ryan - won 20 games for a last-place club. But only Garver won 20 games and hit better than .300 for a club that lost more than 100 games.

Garver pitched for the woeful St. Louis Browns in their final, pitiful years before relocating to Baltimore. In 1951 he won 20 of the Browns' 52 victories, while losing only 12.

He led the American League in complete games (24) that season, as he had the previous year (22). Garver had batted .407 in the Ohio State League in 1944, so it was no surprise when he batted .305 in 1951 to pace the Browns. He hit sixth on occasion, and had a .218 lifetime batting average with seven homers. His zeal for hitting was arrested midway through his career when Early Wynn nearly beaned him. Garver lost a league-high 17 with St. Louis in 1949. He had very little trouble getting Mickey Mantle out, but found Vic Wertz a particular thorn in his side. (WAB)

Later, his nephew, Bruce Berenyi, pitched seven years (1980-1986) for the Cincinnati Reds and New York Mets. With a medium build, black hair and blue eyes, Garver's ancestry was English and his principal hobbies were hunting, fishing, trapping and basketball. He celebrated his 80th birthday in 2005. Until 2013, he regularly attended the St. Louis Browns annual player alumni get-together in St. Louis. Once a Brownie, always a Brownie!