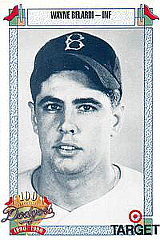 "I have always been clumsy, since childhood, stepping on people with my big feet. After my first home run in 1953, I stepped on Ralph Branca's foot in the dugout and he started the nickname 'Footsie'. When I hit my first major league triple, I tripped over second base, fell at shortstop, then lost my hat and went back to grab it, and tripped over third base. It should have been an inside the park home run." - Wayne Belardi, in the book Baseball Nicknames

Wayne Belardi was one of several future major leaguers who was at Santa Clara University in 1948. He was signed by the Brooklyn Dodgers in 1949 and spent six years in the majors from 1950 to 1956 with the Dodgers and the Detroit Tigers as a backup first baseman and pinch hitter. Big and powerful, Wayne played part of 1949 for the Nashua Dodgers in the New England League, but due to economic hard times in some of the towns in the league, the league was shaky and he was moved out before it failed. He came up to the Dodgers in 1950 at age 19 and hit 11 home runs in limited play in each of 1953 and 1954, the latter mostly with the Tigers. He appeared in the 1953 World Series in two games as a pinch-hitter. Strangely, he was out of the majors at age 26 despite hitting .279 in 1956, but was included in a couple of big trades, first to the Kansas City Athletics and then to the New York Yankees after that season, without making it back. He concluded his professional career hitting .220 in 1957 with the New Orleans Pelicans, a Yankees farm team.