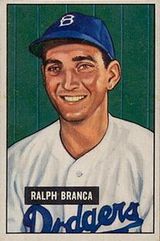 "Anne [Mulvey] and I were engaged, we were going to be married in seventeen days, and when I finally got out to the car, Anne started to cry. And she had a cousin who's a priest, Father Pat Rowley, and I said to him, 'Why me?' He said, 'God chose you because he knew your faith would be strong enough to bear this cross.' And I accepted that, that it would be something I would have to bear for the rest of my life, and I would I accept it. I went about my business but it was tough on the family. Idiots would call my house and talk to my mother: 'Your son should learn how to pitch.'" - Ralph Branca, to Peter Golenbock, from Bums: An Oral History Of The Brooklyn Dodgers 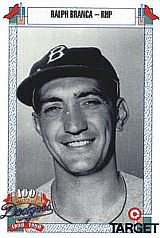 Pitcher Ralph Branca played 12 seasons in the majors, mostly with the Brooklyn Dodgers, appearing in two World Series and three All-Star Games. Despite his big league success, he will forever be known as the man who gave up the "Shot Heard 'Round the World", Bobby Thomson's home run that clinched the 1951 National League pennant for the New York Giants.

Signed by the Dodgers in 1943, Branca made his pro debut that summer with the Olean Oilers. By the following season, he was in the majors as an 18-year-old during World War II, when many older players were serving overseas. He won 21 games in 1947 (second in the NL) and made the All-Star team for the first of three straight years, while his team reached the World Series. He earned the win in Game 6, but the Dodgers fell to the New York Yankees in 7 games. In 1949, he went 13-5 and led the league with a .722 winning percentage. Brooklyn again reached the World Series, again losing to the Yankees.

Starting in 1950, Branca began to be used more often out of the bullpen. In one such relief outing on October 3, 1951, in the third game of a three-game playoff, he gave up the home run to Thomson of the New York Giants that cost his team the pennant. The "Shot Heard 'Round the World" completed a monumental collapse by the Dodgers, who were leading the National League by 13 1/2 games on August 11th. Forever linked, Branca and Thomson eventually became friends. In 1991 and 2001, they toured the country together for the 40th and 50th anniversaries of "The Shot".

Branca hurt himself during spring training in 1952 and was never the same pitcher. After giving up 12 earned runs in his first 7 outings for the Dodgers in 1953, Branca was acquired by the Detroit Tigers. He moved on to the New York Yankees in 1954, pitched for the Minneapolis Millers of the American Association in 1955 and ended his career in 1956 with one more appearance for the Dodgers. Overall, Ralph was 88-68 with a 3.79 ERA in 322 games (188 starts).

Away from the diamond, Branca was a contestant on the game show Concentration in 1963. He won seventeen consecutive games and was invited back for a tournament of champions. In 2012, he made a cameo appearance in the Billy Crystal/Bette Midler comedy Parental Guidance. In 2013, he was portrayed by Hamish Linklater in the Jackie Robinson biopic 42.

In 2011, a debate erupted in the Jewish sports world over whether Branca qualified as Jewish. He discovered that his mother was Jewish and some of his relatives had died in the Holocaust; by Jewish law, this makes Branca Jewish. Others argued that since Branca considered himself Catholic and had cited his Catholic faith for being able to bounce back from the famous homer, that he should not be considered Jewish.

Branca's daughter, Mary, is married to former big league skipper Bobby Valentine. Branca passed away of natural causes in a nursing home in Rye, NY on November 23, 2016. He was 90.